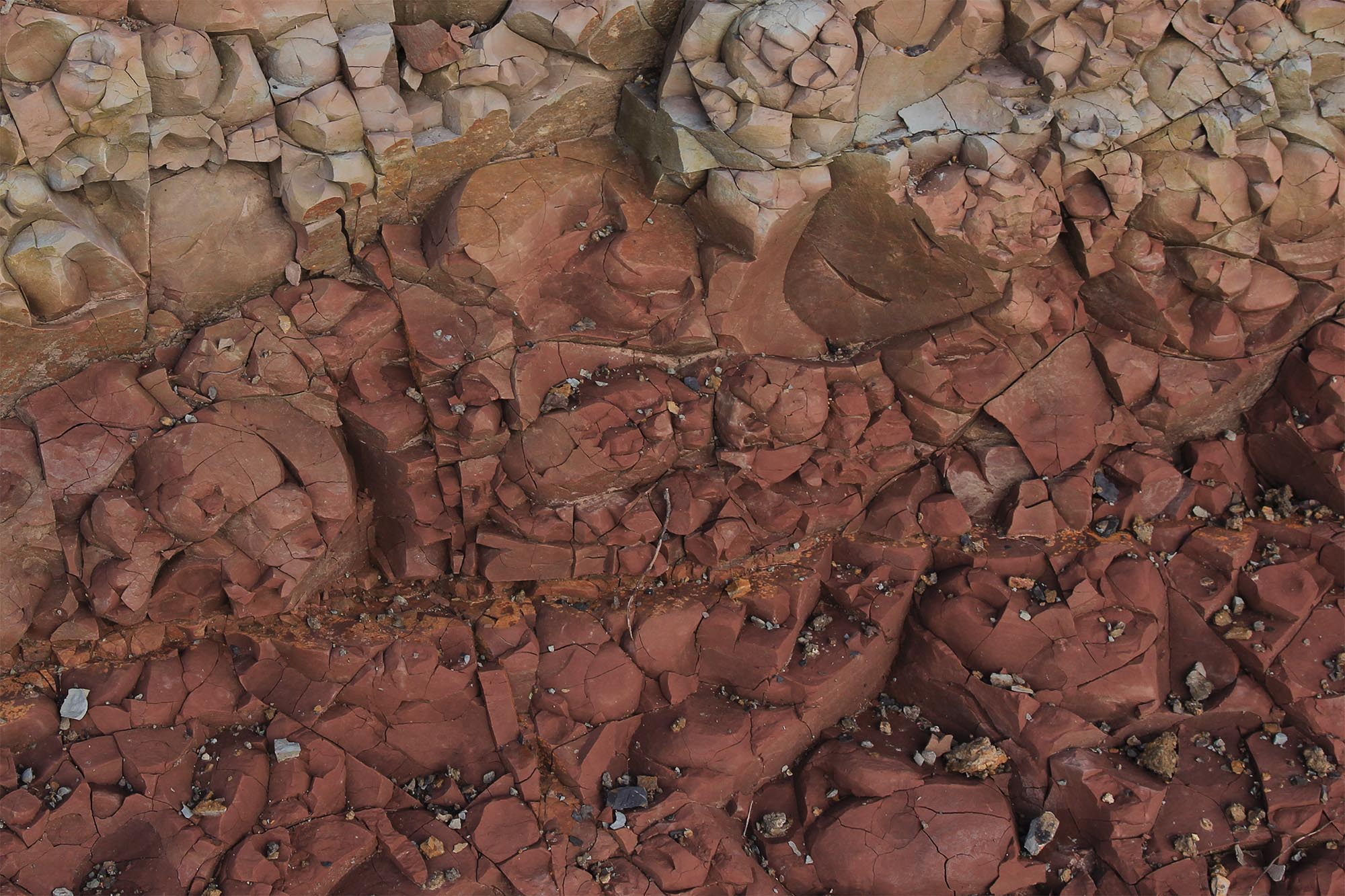 Sidmouth Mudstone freshly exposed (which you rarely see – this example is from a river scoured cliff at Newnham-on-Severn) showing red-brown silty mudstones that weather into conchoidally fractured blocks. The image below is how you are more likely to see it, where more extensive weathering produces claggy mud. The red colour is due to iron oxide and the pale green to grey where the oxide has been reduced by some process that created local anoxic conditions, possibly long after the rock first formed.
The rock consists of iron oxide coated quartz silt and clay minerals. 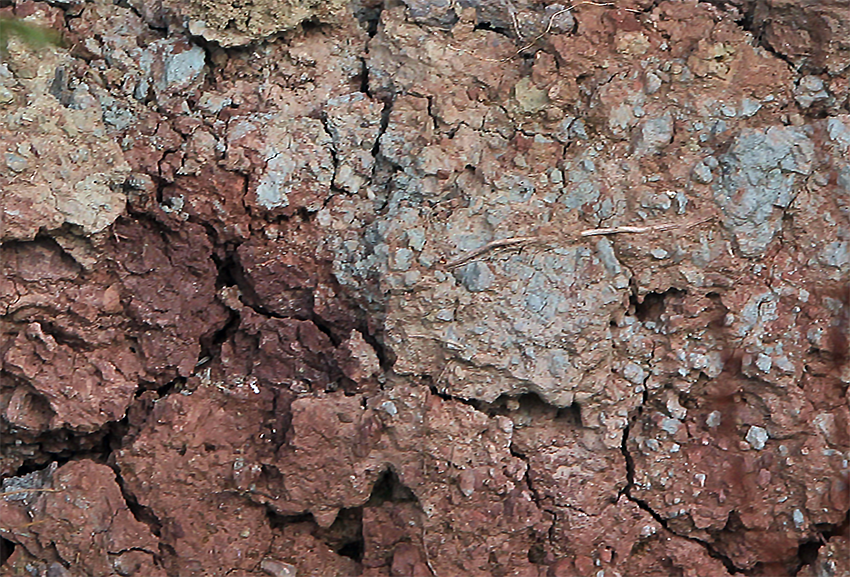 Why is it called the Sidmouth Mudstone and not say the Martley Mudstone?  Geologists assign names to rocks based on the place which is the home of the ‘type location‘. This will be a place providing excellent exposures of the said rock with all its characteritics on best display. In this case that is in the red cliffs of Sidmouth on the south Devon coast.

The diagram below shows the formations of the Mercia Mudstone Group. Not all these formations will be present at all locations and thicknesses of formations varies from place to place. 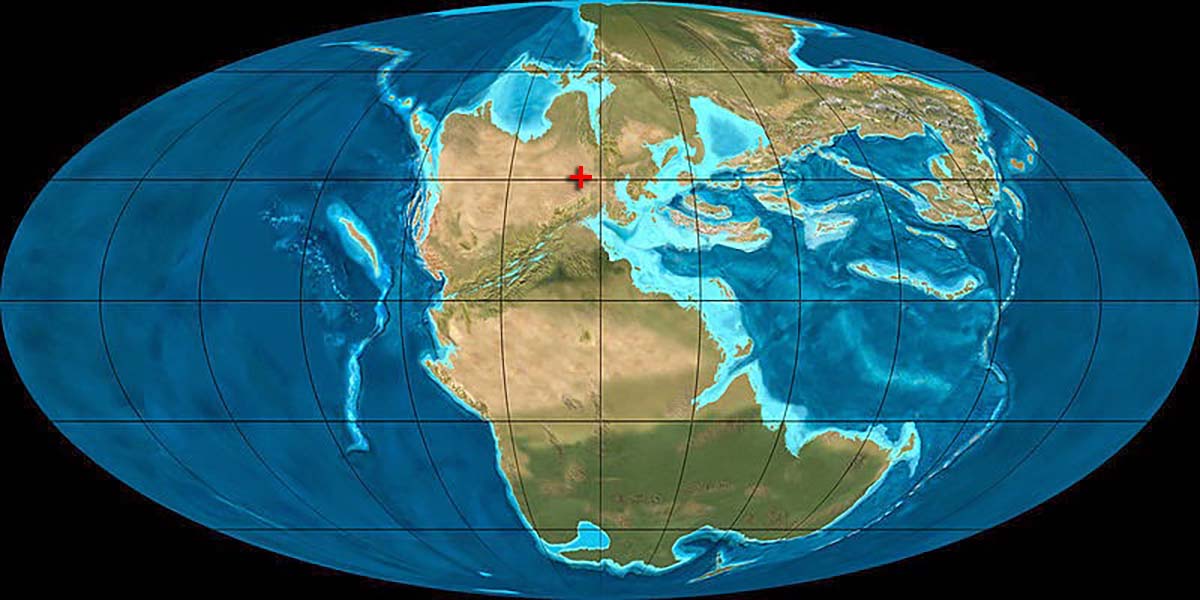 The Earth around 220 million years ago, the time the Sidmouth Mudstone was being deposited. The red cross marks the approximate location of Britain at the time – around 30° north of the equator. This was a location still very much in the midst of the Pangaea supercontinent, dry continental hot desert conditions prevailed. To the east, beyond a range of mountains lay the Tethys ocean. Climatic modelling suggest that moisture laden winds blowing from the Tethys and meeting the mountains along the continent edge led to seasonal ‘super monsoons’. Some of the water from these deluges would almost certainly have led to flash flood conditions over the plains where the Sidmouth Mudstone was being laid down. 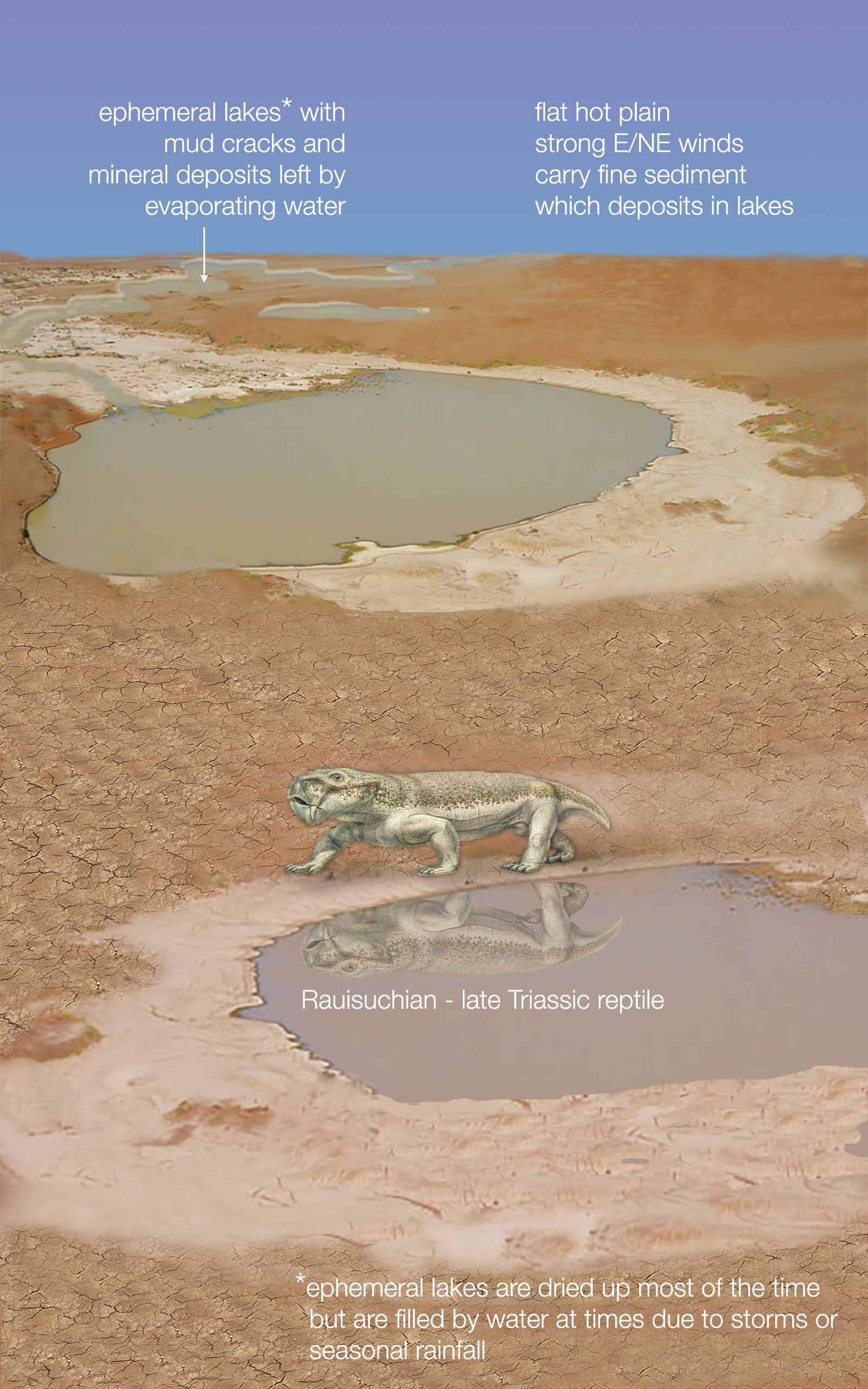 How the area now known as Worcestershire may have looked at the time of the Sidmouth Mudstone deposition – the view is to the north.

Around the time of the Sidmouth Mudstone deposition the great supercontinent of Pangaea is starting to break-apart. This placed the crust under tension in Britain.

The pulling-apart formed basins into which sediments inevitably built-up (depocentres). One of these basins lay under much of Worcestershire, to the east of the Malvern line. Other basins formed beneath Cheshire, Somerset and Dorest, along with East Irish Sea Basin and North Sea graben. 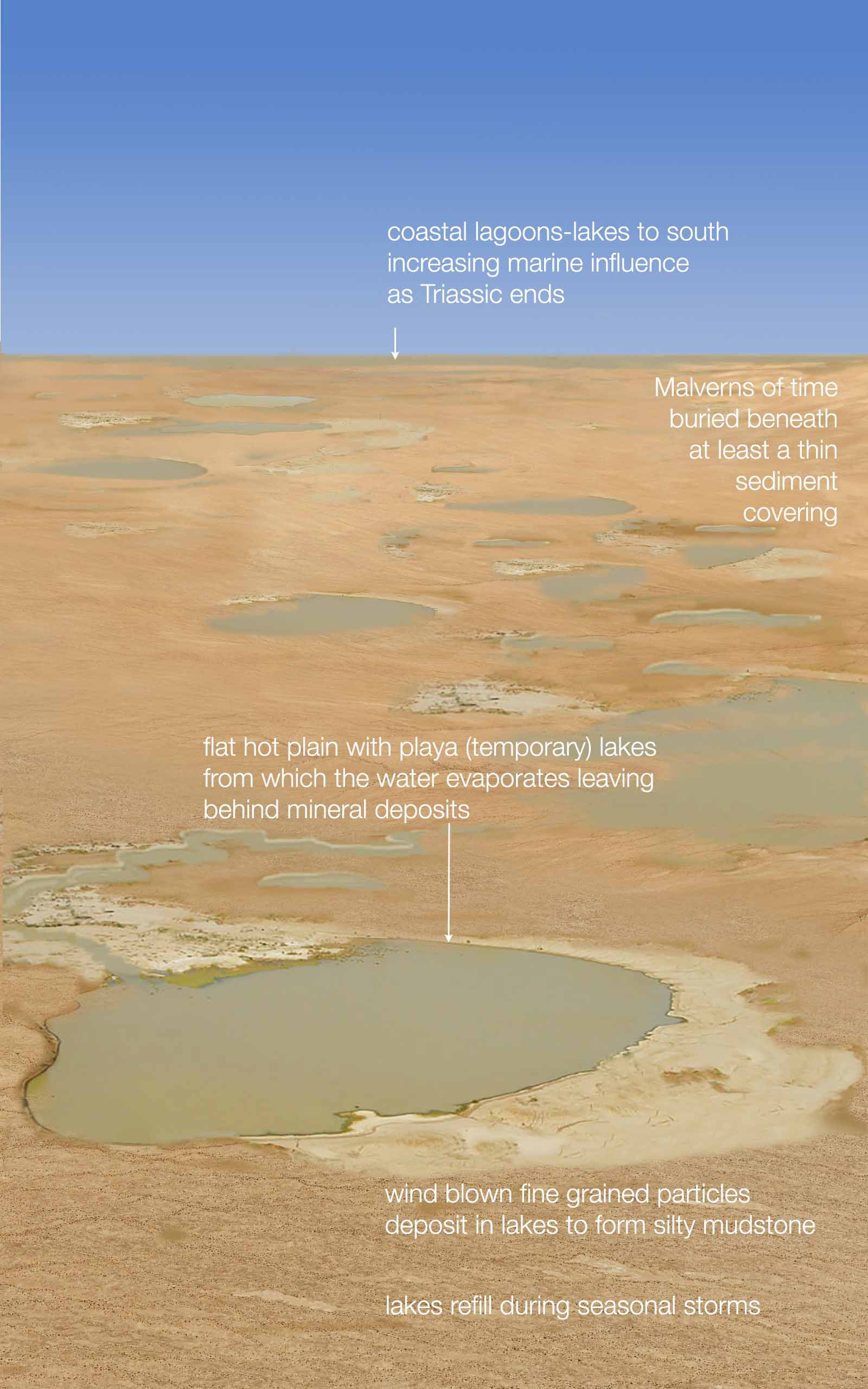 How the area now known as Worcestershire may have looked at the time of the Sidmouth Mudstone deposition – the view is to the south. 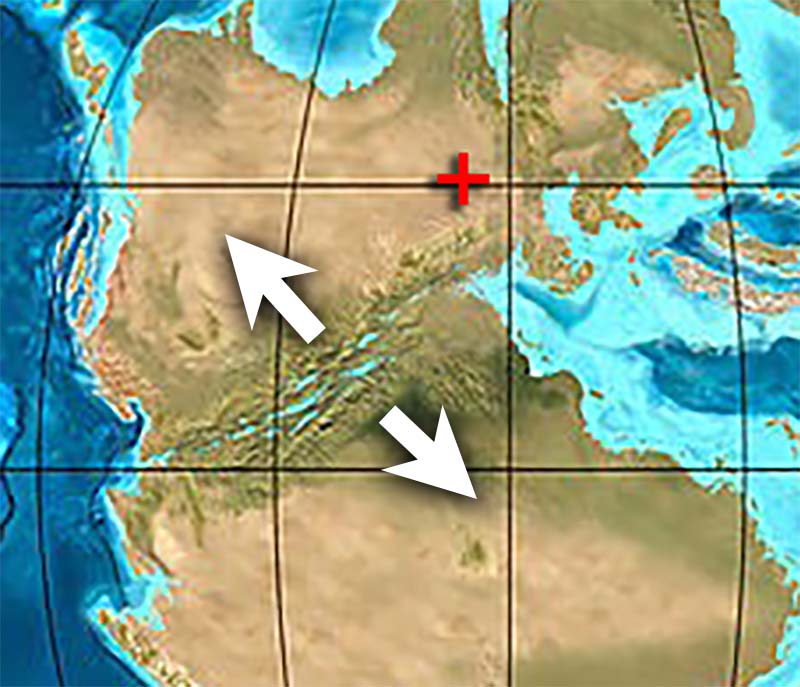 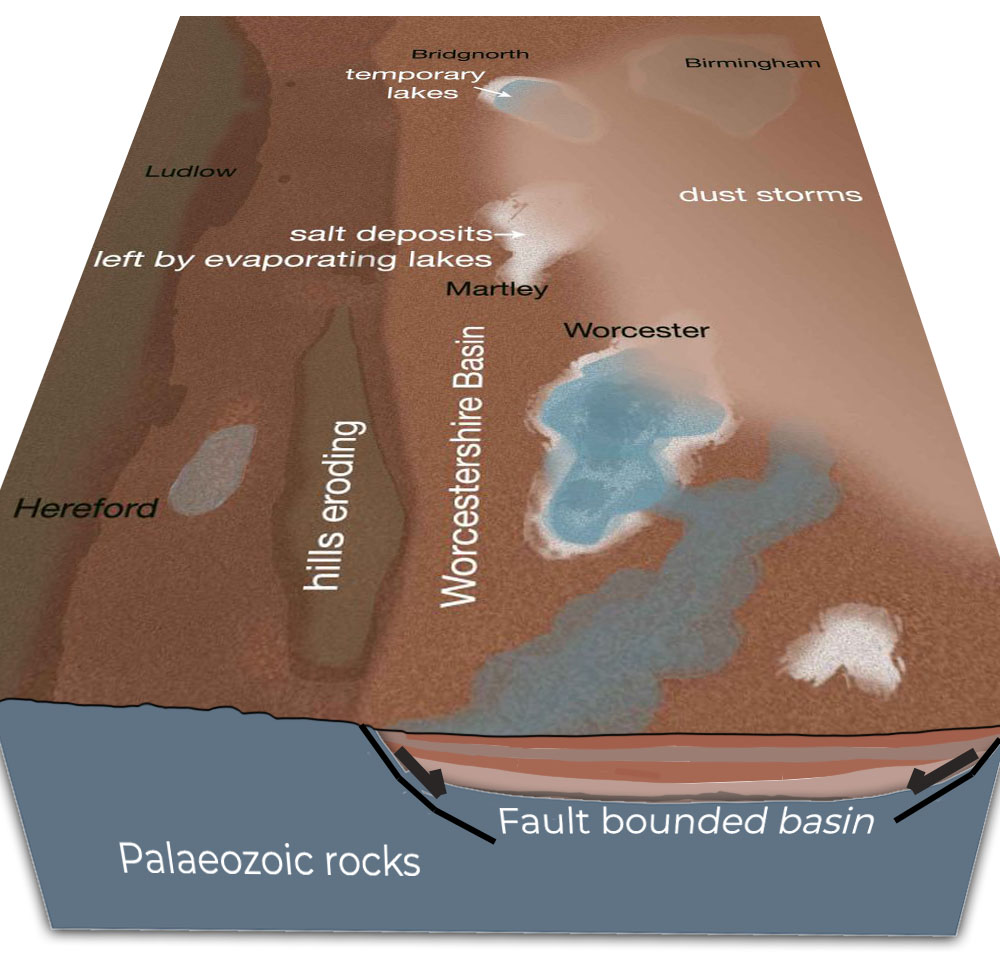 Under the crustal tension a basin (graben) opens over millions of years, by rocks moving down bounding faults, reversing the uplift that had occurred along these same fault belts during the time of crustal compression in the late Carboniferous and Permian.

In the centre of the basin some 3km depth of sediment formed by the end of the Triassic.

During the time of the Sidmouth Mudstone most of the deposition was by wind blown dust from lateritic weathering of the adjacent terrain.

Lateritc weathering produces fine sediment with a rusty-red colouration and develops under prolonged alternating conditions of high temperature and heavy rainfall as found within lattitudes close to the equator.