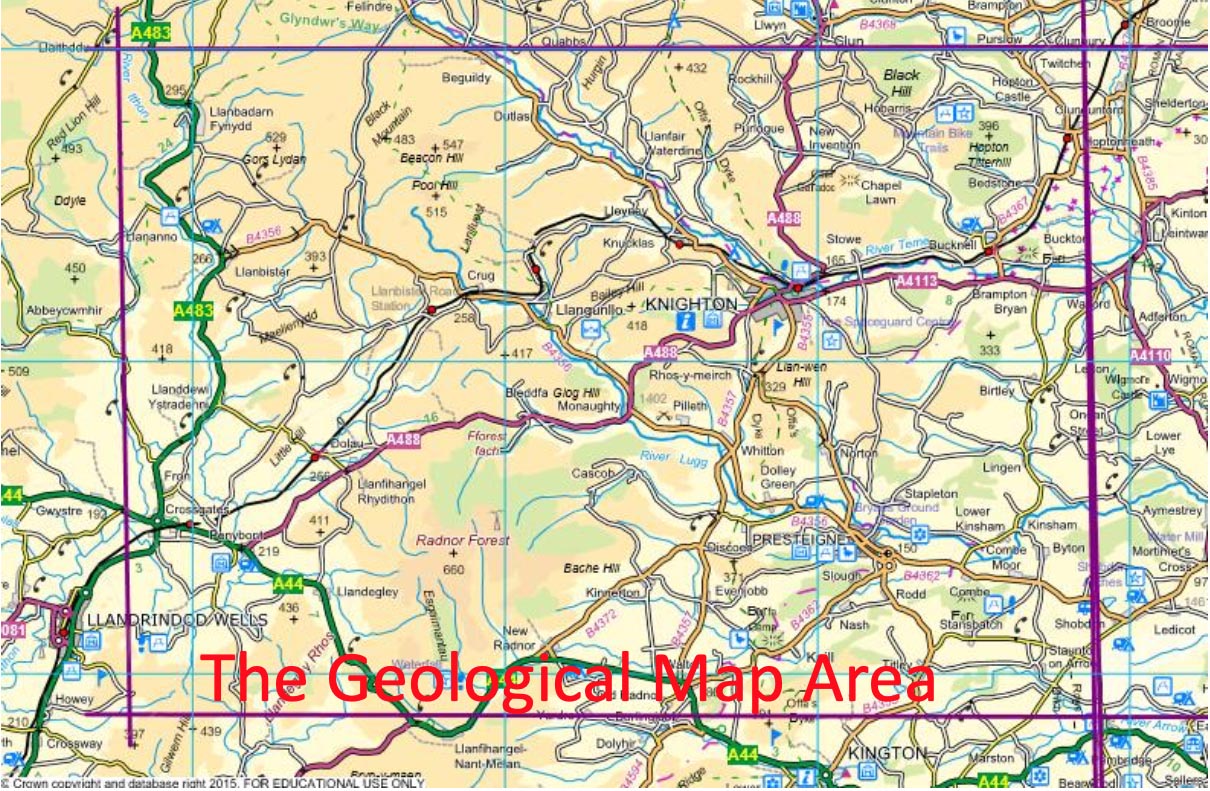 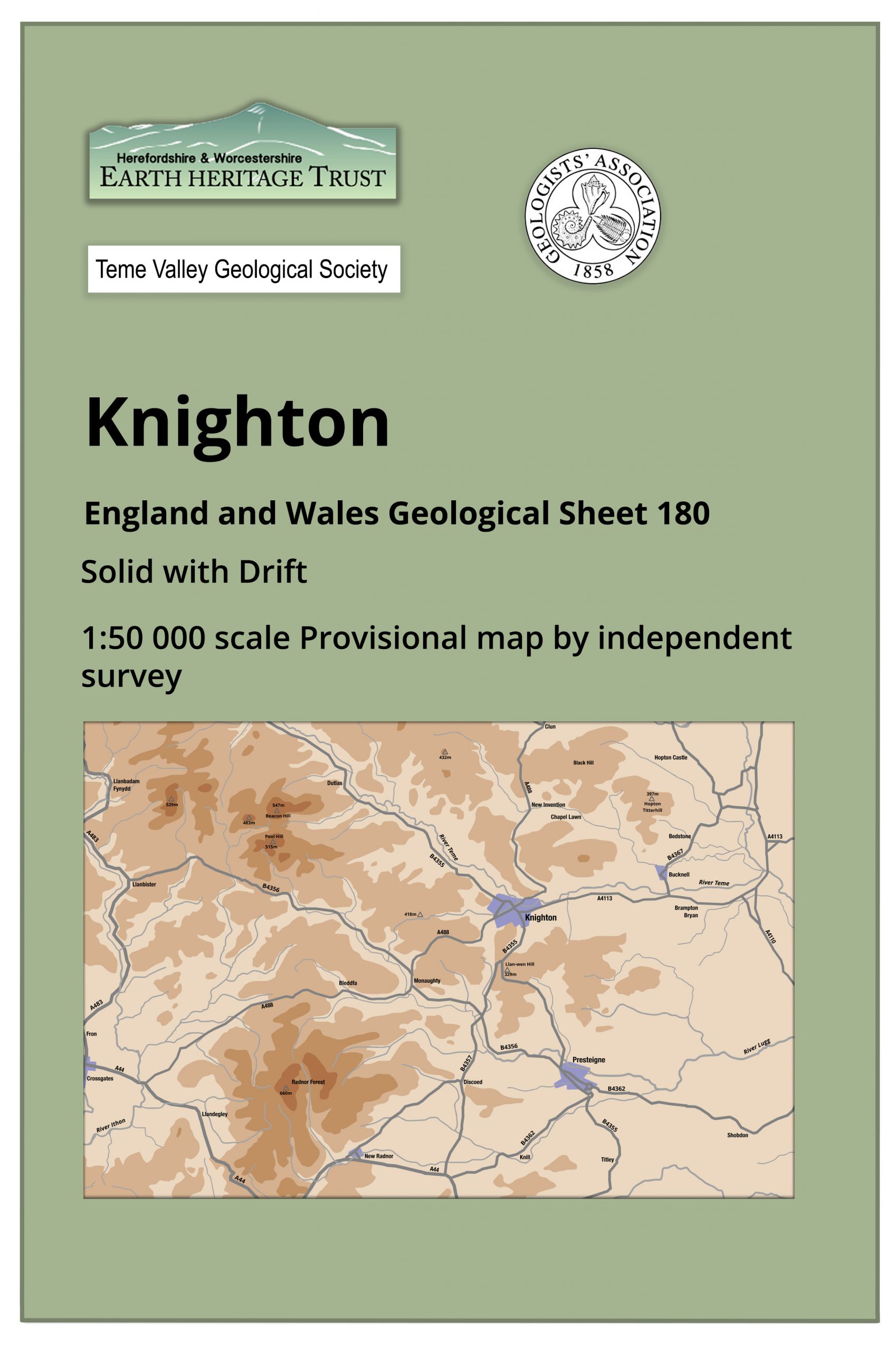 Take a look at the back of any BGS geological map, and locate map 180, it has not been mapped by BGS, and it is one of only three in the country that fell off the now defunct BGS mapping program. This area covers the upper reaches of the River Teme, and the outer reaches of the known [TVGS] world!

It is a large area extending from Brampton Bryan and Shobdon in the east, and Penybont to Llandegely Rocks in the West. It encompasses the Church Stretton Fault which merges with the Leinthall Earls Fault near Presteigne and the Pontesford Disturbance, and so forms a real transition from the Silurian Shelf environments near Ludlow and the Welsh Basin.

Some of the area has been worked on by Charles Holland and others, and so the enterprise of mapping it should not be too onerous, but all of the sheet needs to be checked, with quite a lot of original geological field surveying.

Arthur Tingley has undertaken a feasibility study and concluded that the work could be carried out with a little citizen science. So with the help of a small award from the Geologists Association and the Open University, he is nearly ready to make a start.

At the TVGS meeting he asked for expressions of interest in the project; 16 people indicated their willingness to participate. They have a wide variety of levels of geological experience and skill, and so program of training and skill building will be put together to enable the volunteers to build their confidence to make a useful contribution to the project.

This is a unique opportunity to do some real mapping on an area that needs it. The purpose it to build the map of Knighton 180 sheet to a standard that could potentially be published by BGS.

Arthur’s relaxed, friendly and ‘you can do it’ or ‘you will be able to do it when I have finished with you’ approach to mapping the empty quarter (geologically mapwise that is) around Knighton, enthused many to sign up for this ambitious project (how do you eat an elephant? One bite at a time). 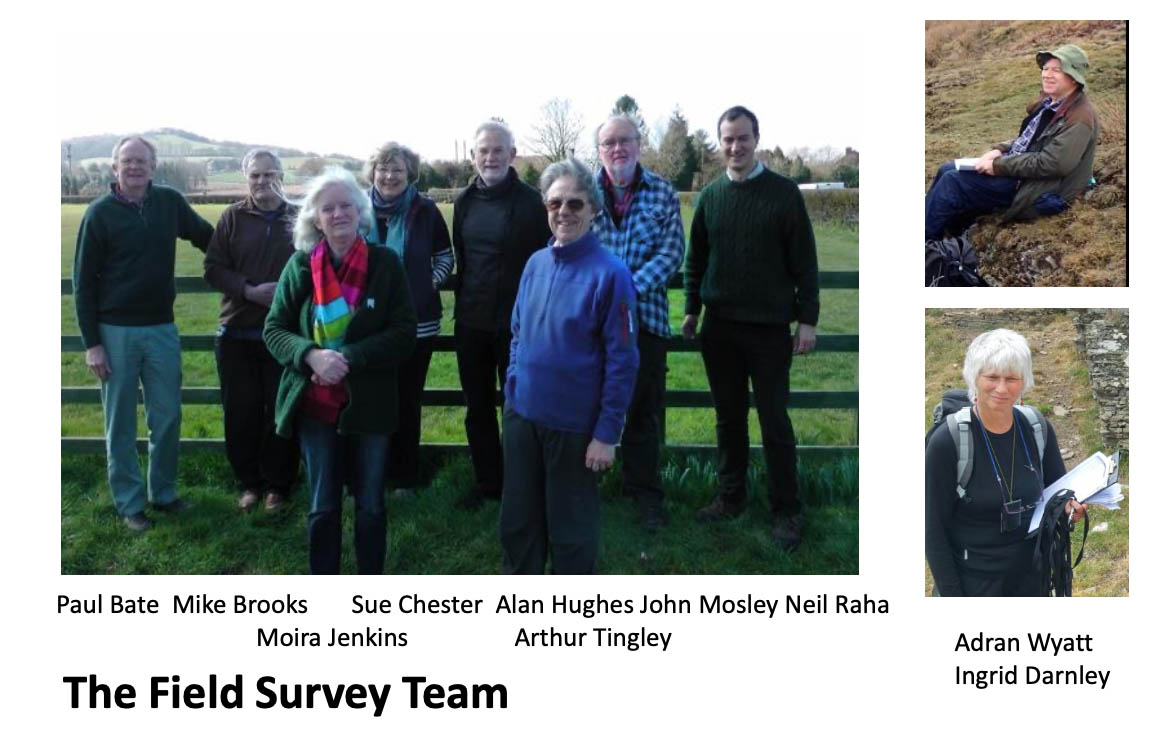 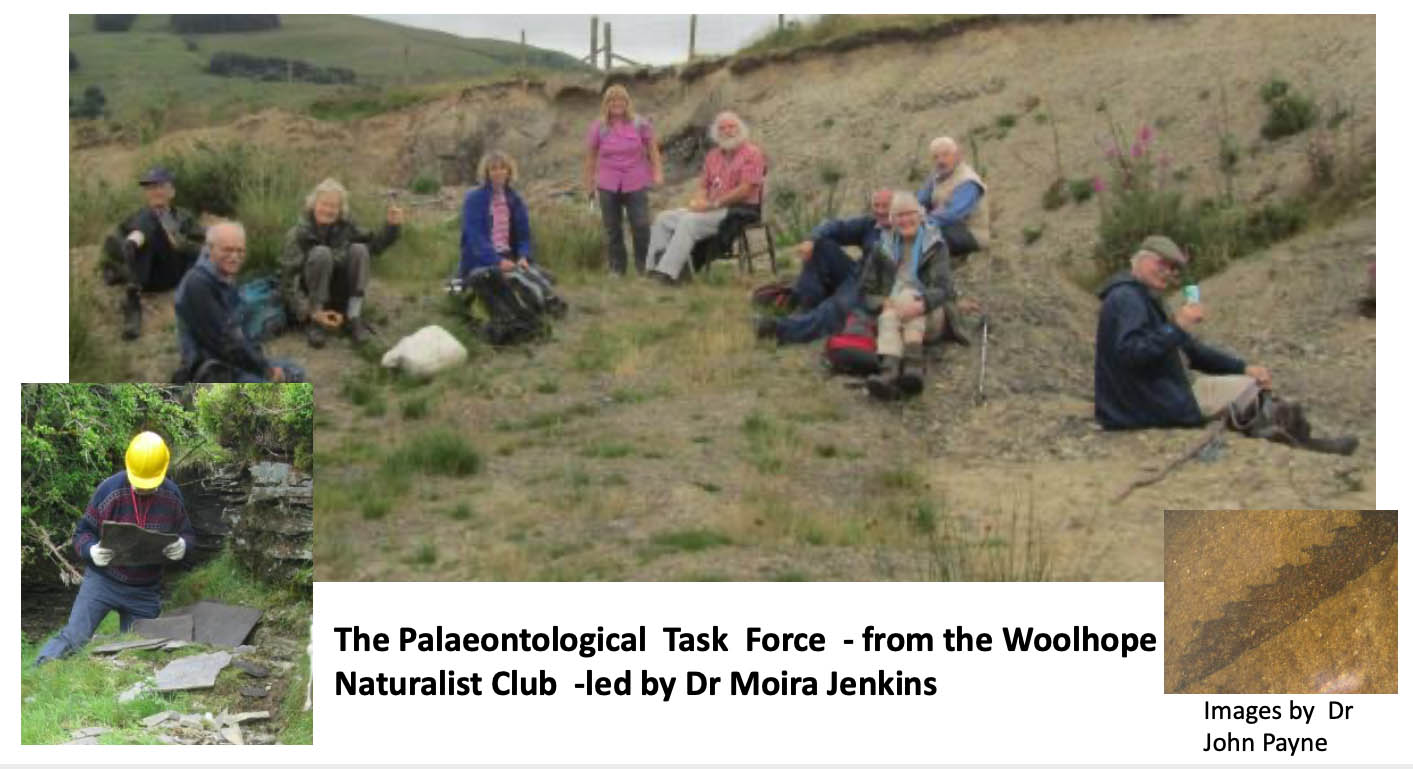 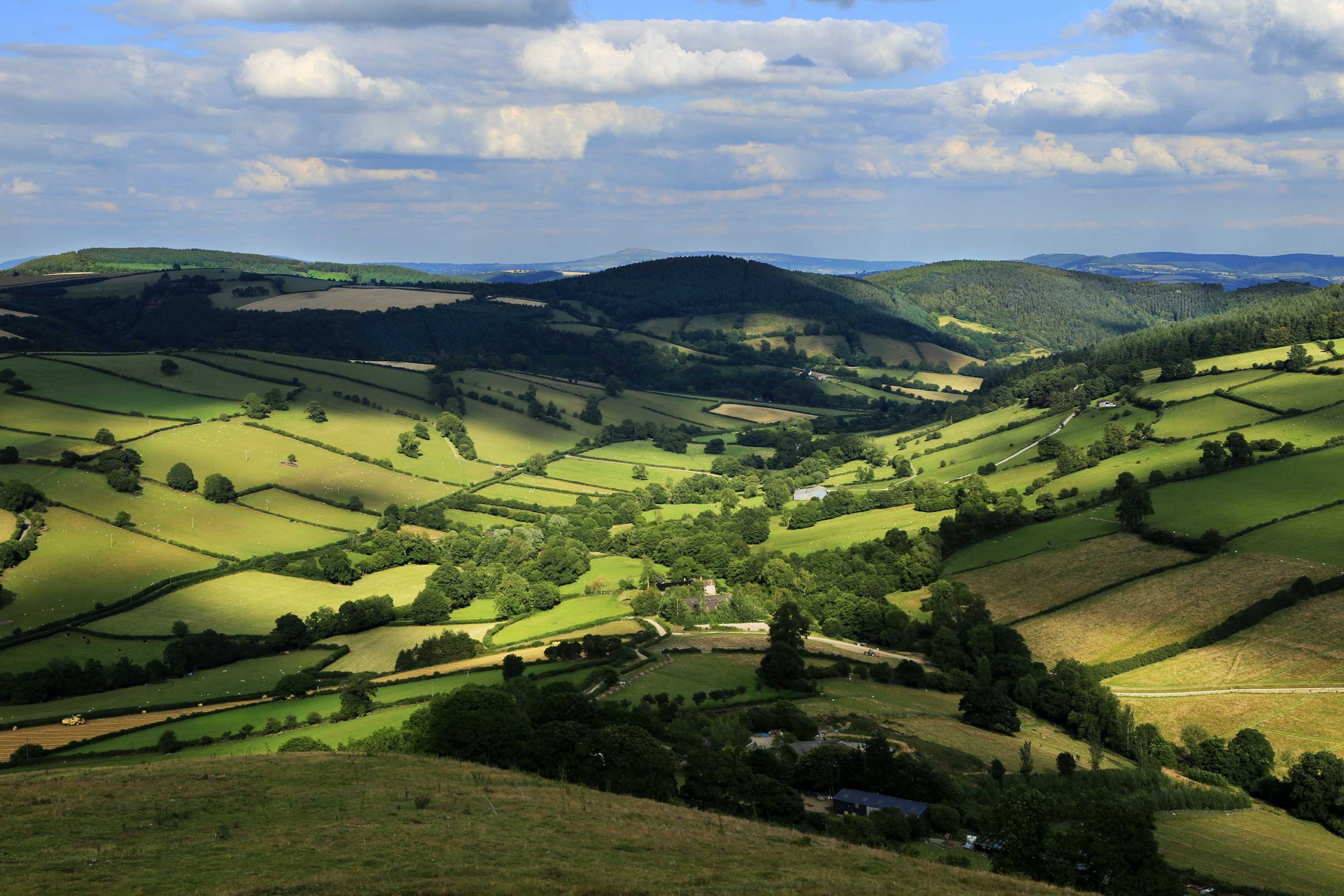 Valley of River Redlake near Bucknell 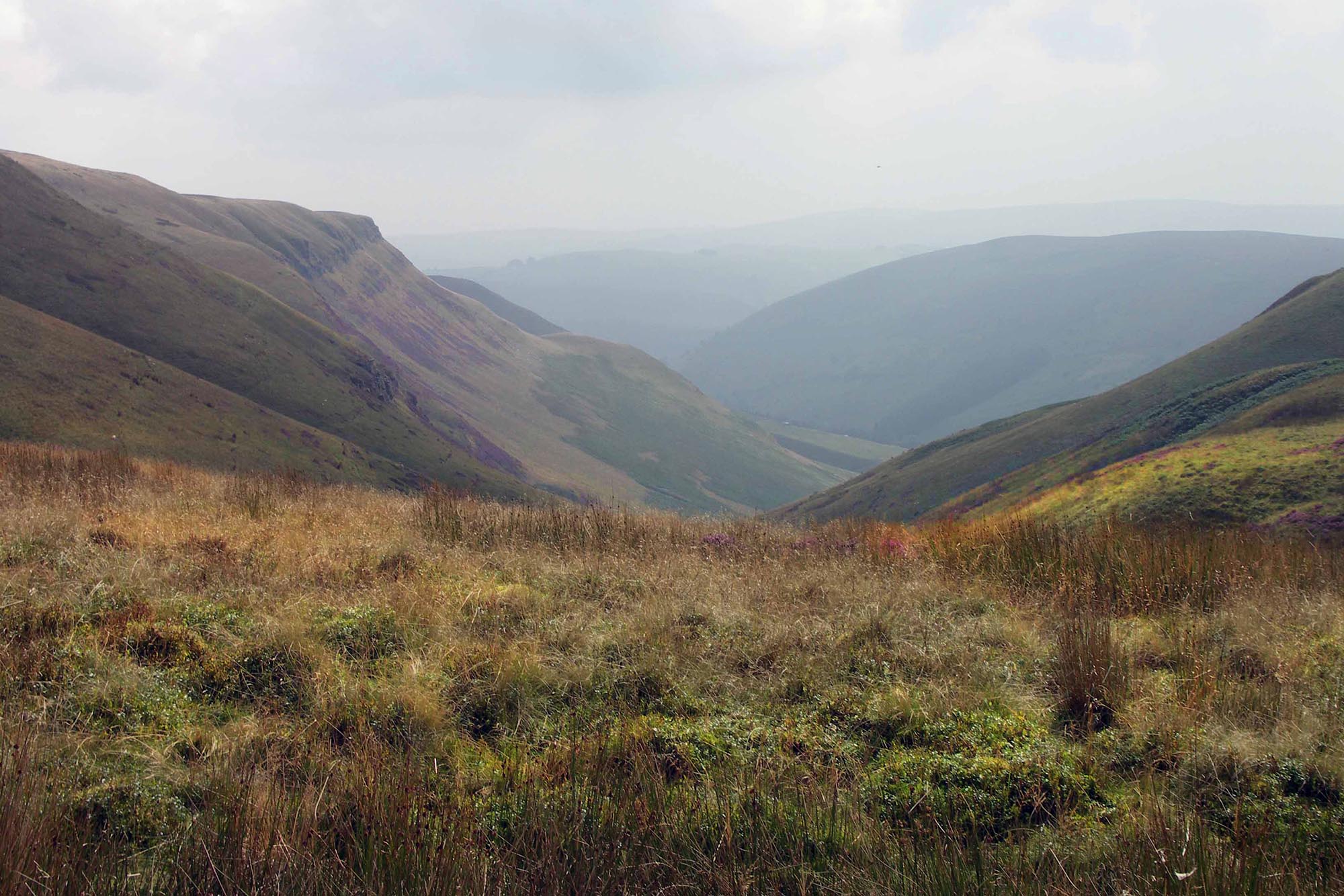 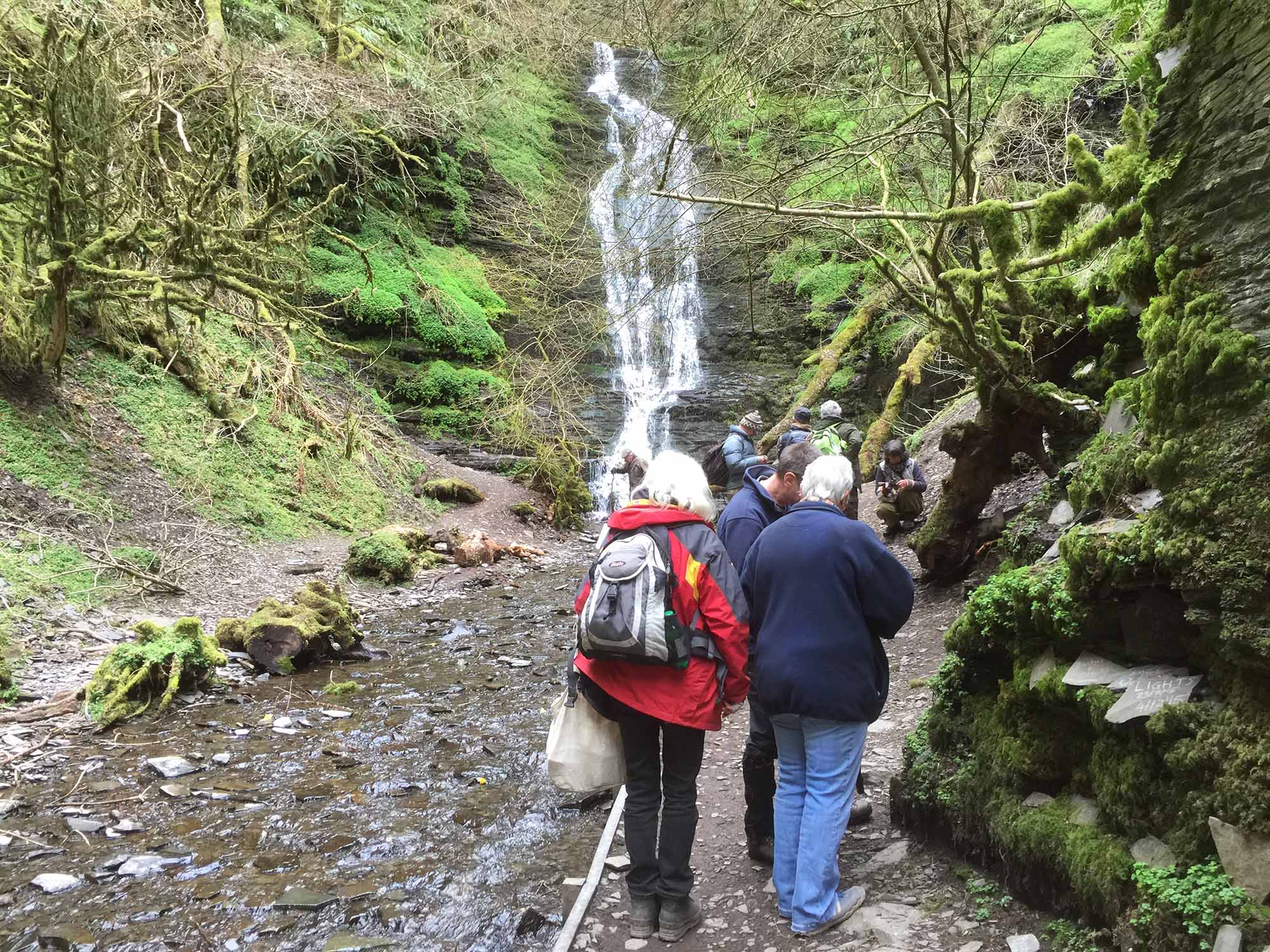 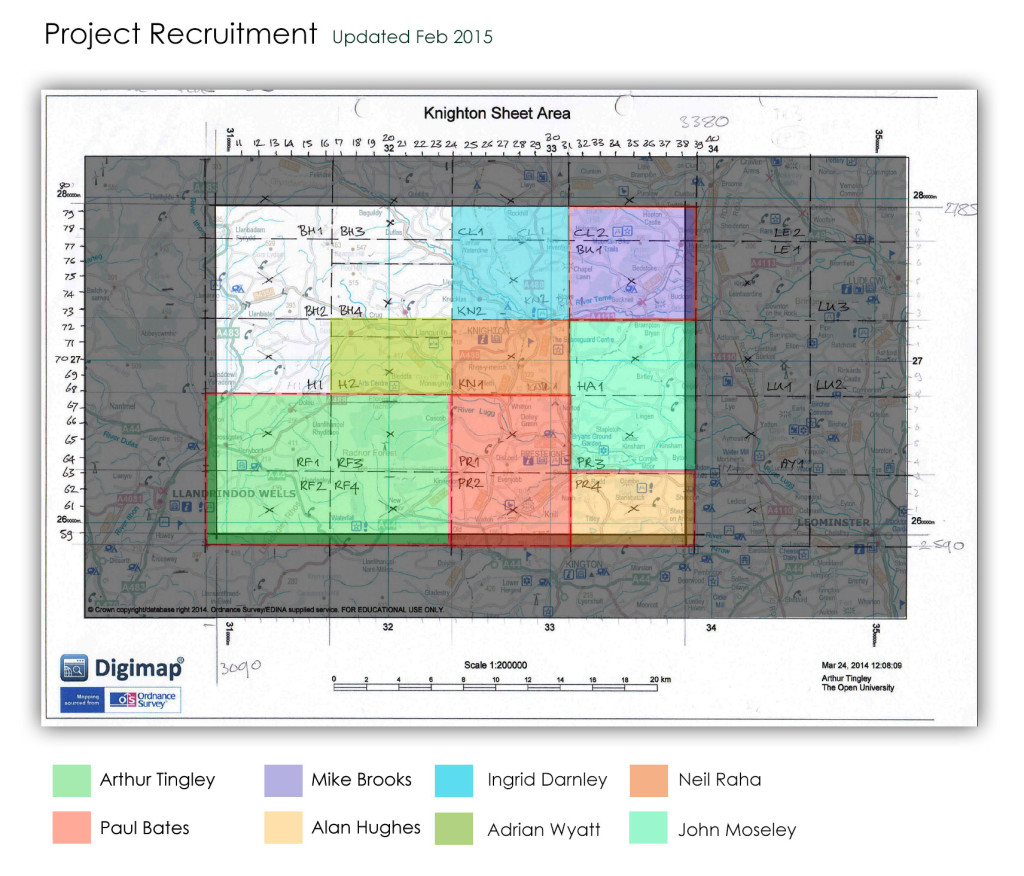 Survey work was carried out on public access land, or where required with land owner permission. Maps and Google Earth was used to locate possible exposures and plan field traverses that should yield useful data. With a lot of the area covered by glacial deposits and extensive forest cover, finding decent exposures of in-situ bedrock was always a challenge.

Arthur’s ‘geology roams’ in the Mathon and Knapp and Papermill Nature Reserve areas were used to introduce the surveyors to ‘a record what you actually see’ approach to field work.

Legend for the Mathon area map 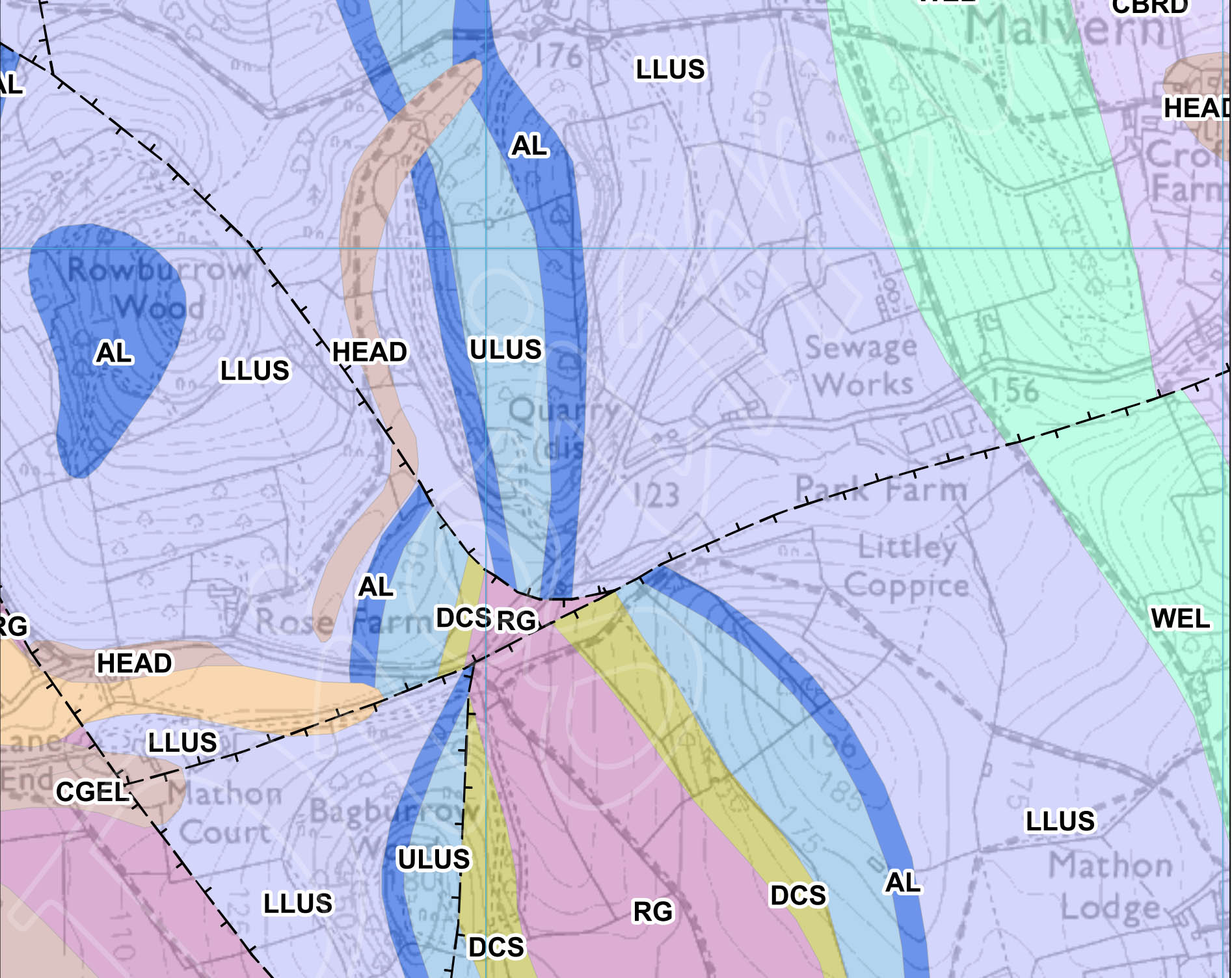 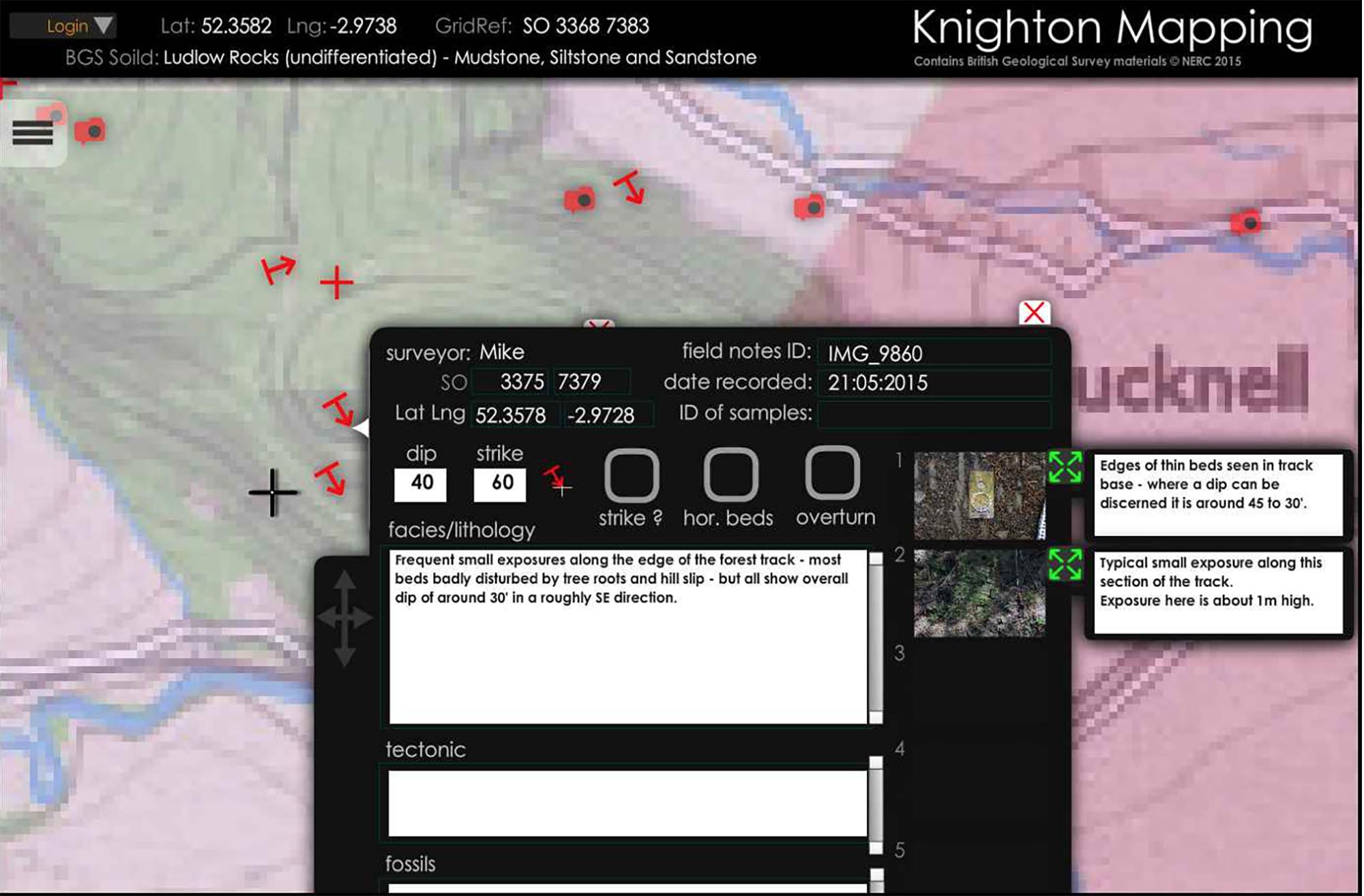 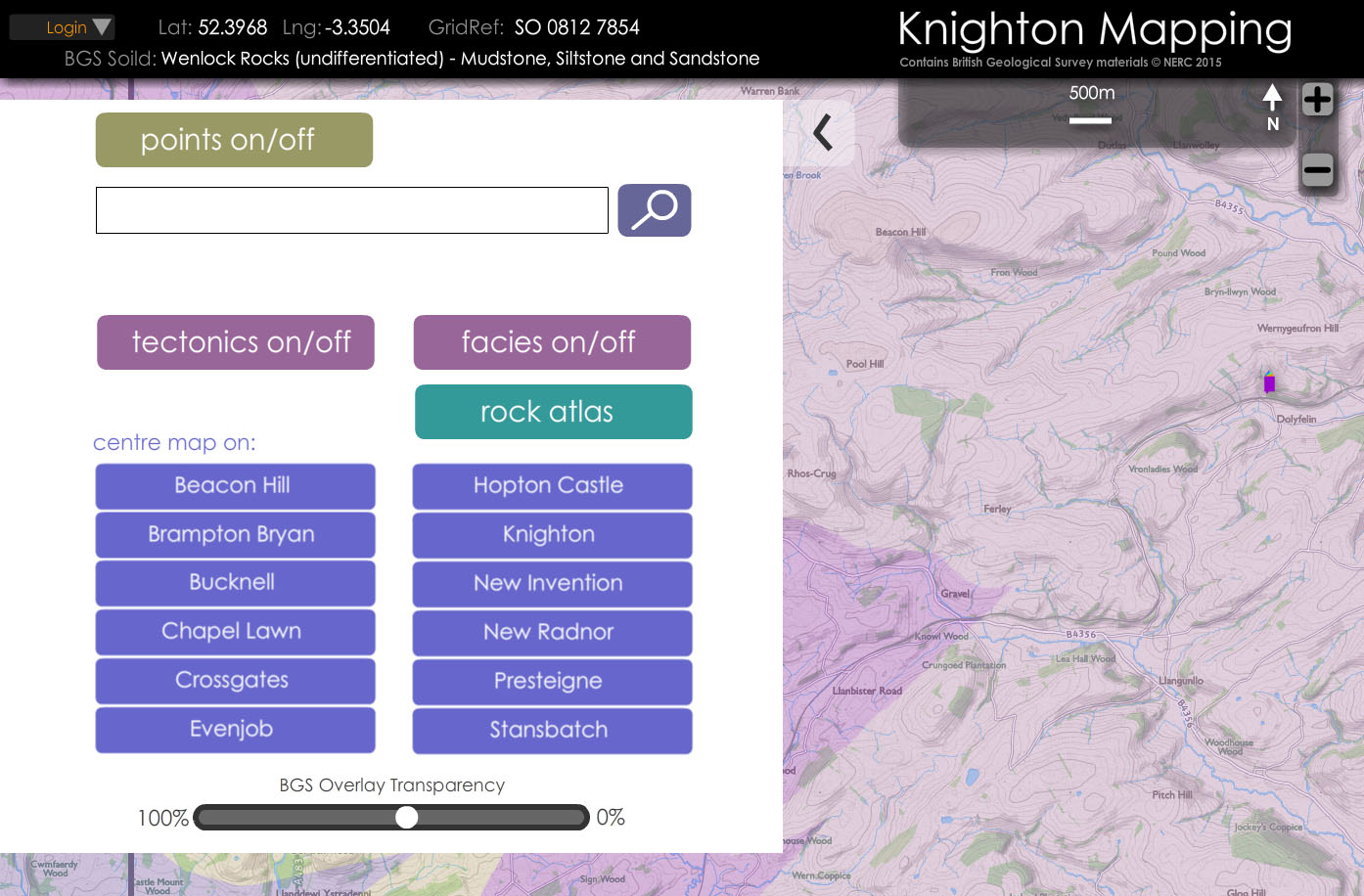 A web based tool was developed to allow surveyors to enter their field slip data, photos and sketches into a database. With the data shared amongst all people with a login to the system.

PDF about using the tool. Note the tool is no longer available on the web,

A Rock Atlas was produced by Arthur to guide the surveyors with identification of facies in the field.

The  palaeogeography of the  land which now comprises the Knighton Sheet implies  that there was, over the period  from late Llandovery to Pridoli, a low and stable land mass to the East [Midland Block]; and an ocean [Iapetus]  to the West.  This area evolved slowly to become a back arc basin as two tectonic plates [Laurentia and Avalonia]  slowly converged and  the sea closed,  thus the area eventually came under pressure and inverted [ popped up, thicker deposits bulging]

Relative sea level changed though the time period from being very low, during Lower Silurian; the sea level was rising as a result of recent recovery from the  Ordovician ice age,  to high during Wenlock. Then again falling through  the Ludlow and during the Pridoli the sea  became shallow generally and then land  partially emergent. This was  as a result of uplift, sea level fall or more likely the accommodation space for sediment was full.

The reasons for relative sea level change varied from Eustatic [global, ice age] to regional tectonic [plate movements]  and  local [fault movements], and of course all of these factors were operating at the same time. The Palaeoclimate was also evolving , partly as a result of the migration of the plates  from 50 to 20 degrees South during this period. Added to this the global climate was changing, as result of erosion of mountain systems [drawdown of CO2] and  rerouting  of ocean currents [as the oceans changed shape].

All of that amounts to a lot of environment change during the Silurian; within  the tiny patch of land, from the Malverns to Llandrindod Wells [about  80 km]; for the most part the submarine slopes seem to have been quite gentle,  with no apparent shelf break, [subject of course to our observations, as nobody has actually established this before, where we might postulate one in the area of the Church Stretton Fault].

Incidentally as a rough estimate, if there are about 2000 metres of  sediment in the pile from Llandovery to Pridoli, which was deposited over a period of  20 Million Years,  and  the rate of sedimentation is constant , then  1 cm = 100 years.

There were various sources of sediment, from the South and the East alternating, which can show up as abrupt changes in sediment type. Furthermore there are disturbed beds and channels throughout the sequence, in all areas.  This could as well be due to a variety of causes such as earthquake, distant storms, current fluctuations and sea level change. The latter may cause disturbance simply by altering the hydrostatic equilibrium, wherein the pore water pressure is destabilised with an increase or decrease in density of water in the column, this leads to mass wasting on the very slight slopes which might exist.

The seas varied from shallow water in the east to deeper water in the west, often with anoxic conditions in  the bottom waters [quiet , unventilated areas not stirred by oxygen rich currents], alternating , perhaps seasonally or due to tempest, with oxygenated waters.   There is the possibility that oxygen layering through salinity and temperature variations or excess biochemical oxygen demand, [perhaps due to flushes of algae and bacteria]. The types of sediment are generally fine or very fine, dominantly angular quartz with variable concentrations  of  evaporates [calcium carbonate].

All environments  imprint a character upon the sediment which ultimately arrives in a depocentre,  and  in turn we recognise these  as a   variety  of  recognisable facies types which form the  lithology.   The environmental variables which can be inferred are :   composition [clasts and chemistry]; biology, which vary dramatically due to presence of oxygen, nutrients, substrate, salinity temperature and light ; oxygen in the water column; currents due to temperature, depth, salinity and disturbances; temperature, vary according the latitude, depth of water column and source of deep currents.

All those variables are prone to alteration  in response to  environmental change, and it is the sequence of those changes which give us the evidence that we use to construct a geological history. We call this sequence stratigraphy, in this area  the sequences are made of  the component parts described below.

In the area of study the characteristic feature of many  of the facies is their alternation of sediment  type, terms such as striped , laminated  or  coupled  predominate the descriptions indication that the source of sediment were constantly switching. This would be normal in a boundary zone between one environment and another. This also means that inferences that are made in one small area many not correlate well due to the variability in environmental conditions and their causes; sediment switching and turbidity currents will all cause a patchiness in the areal extent of a deposit, and so biomes will also  vary probably influenced by microclimate and random distribution.

So the basic elements which are combined together  to make up characteristic rock types  this are shown in the table below, and there follows  a series of images of various lithologies with their interpretation, and where they have been defined, a rock name. 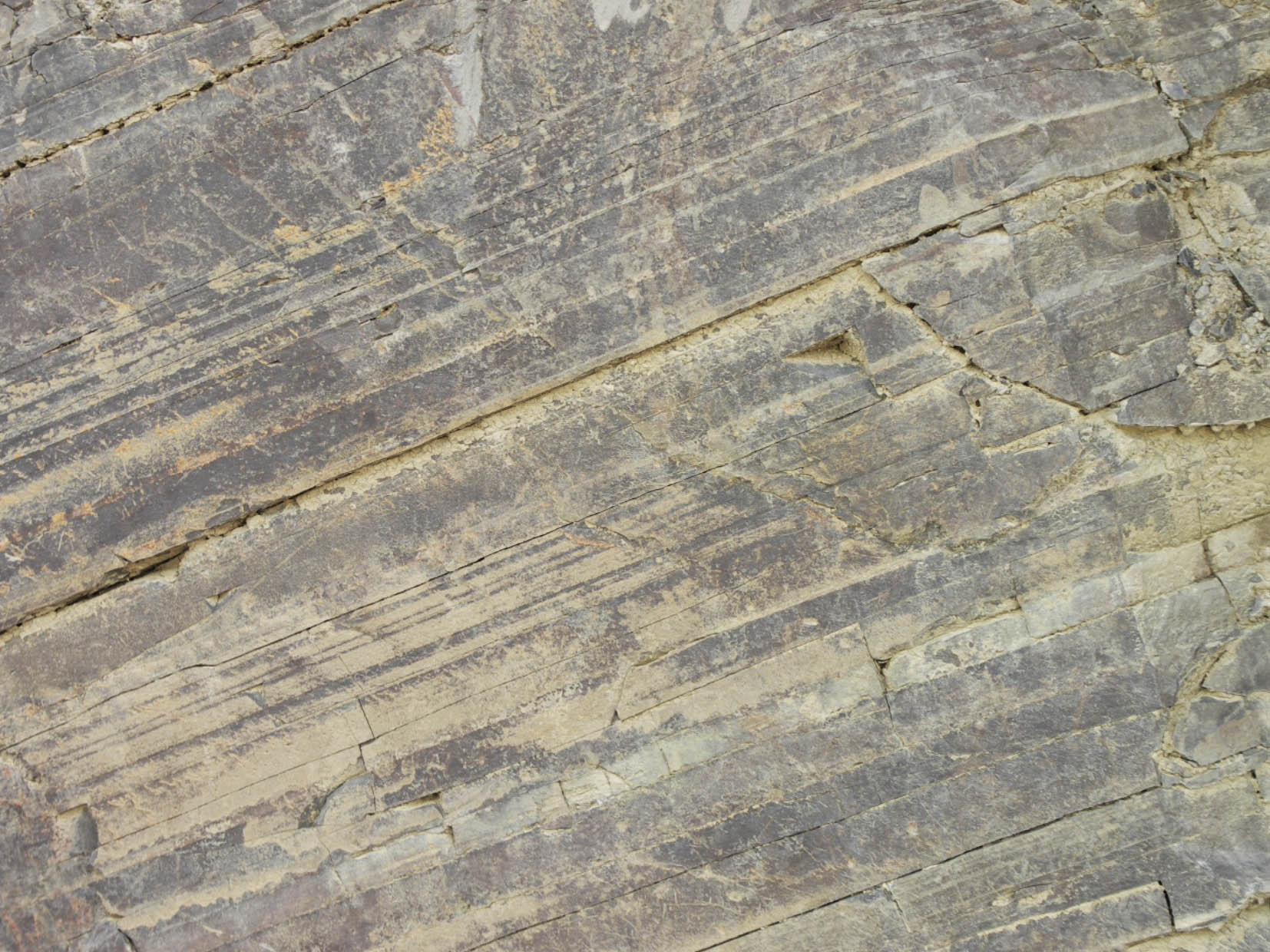 Cwm Blythus  Another type of turbidite = Bailey Hill Formation,  consists  of quite variable beds of buff siltstone and  grey silts or mudstones. 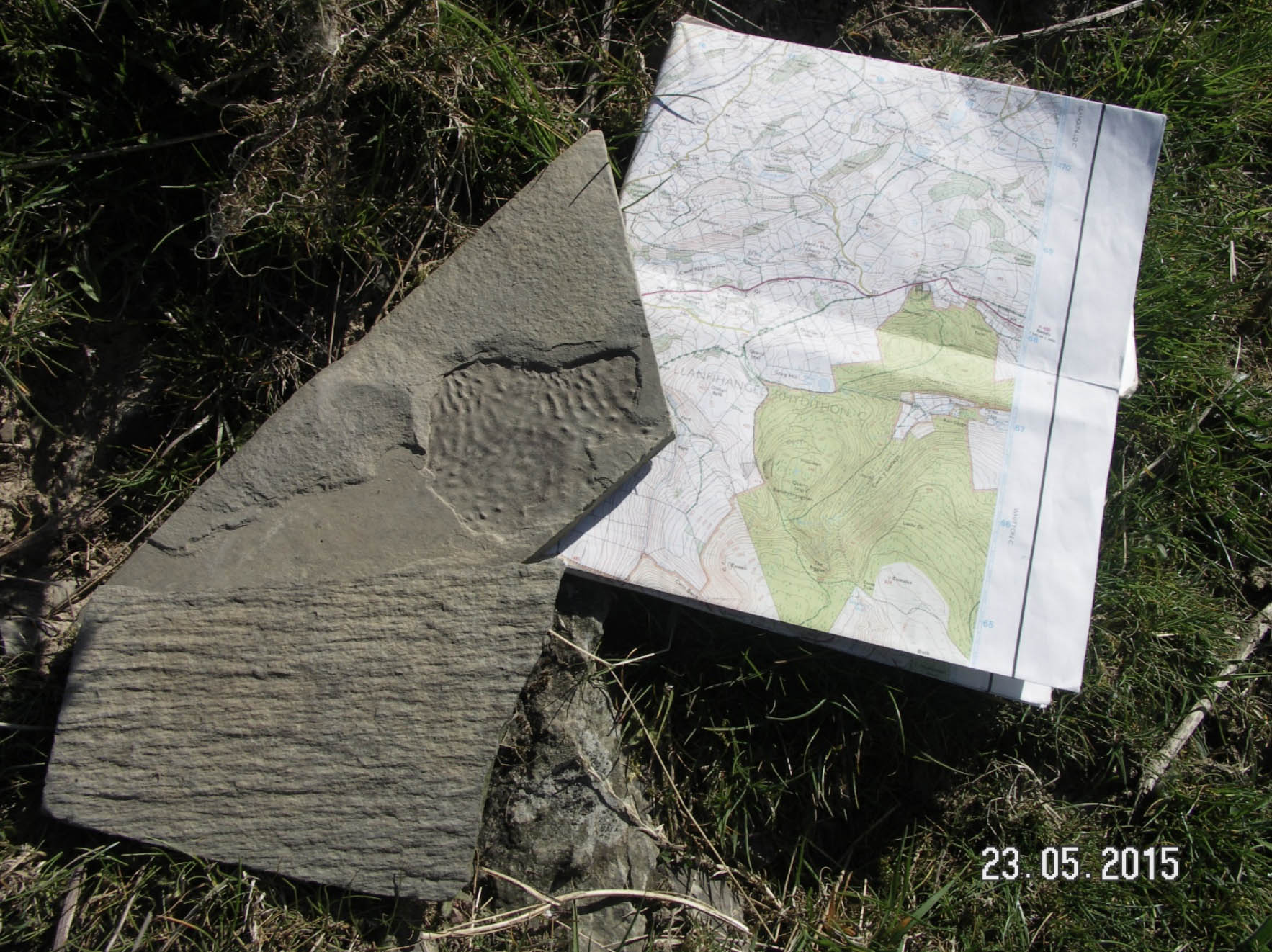 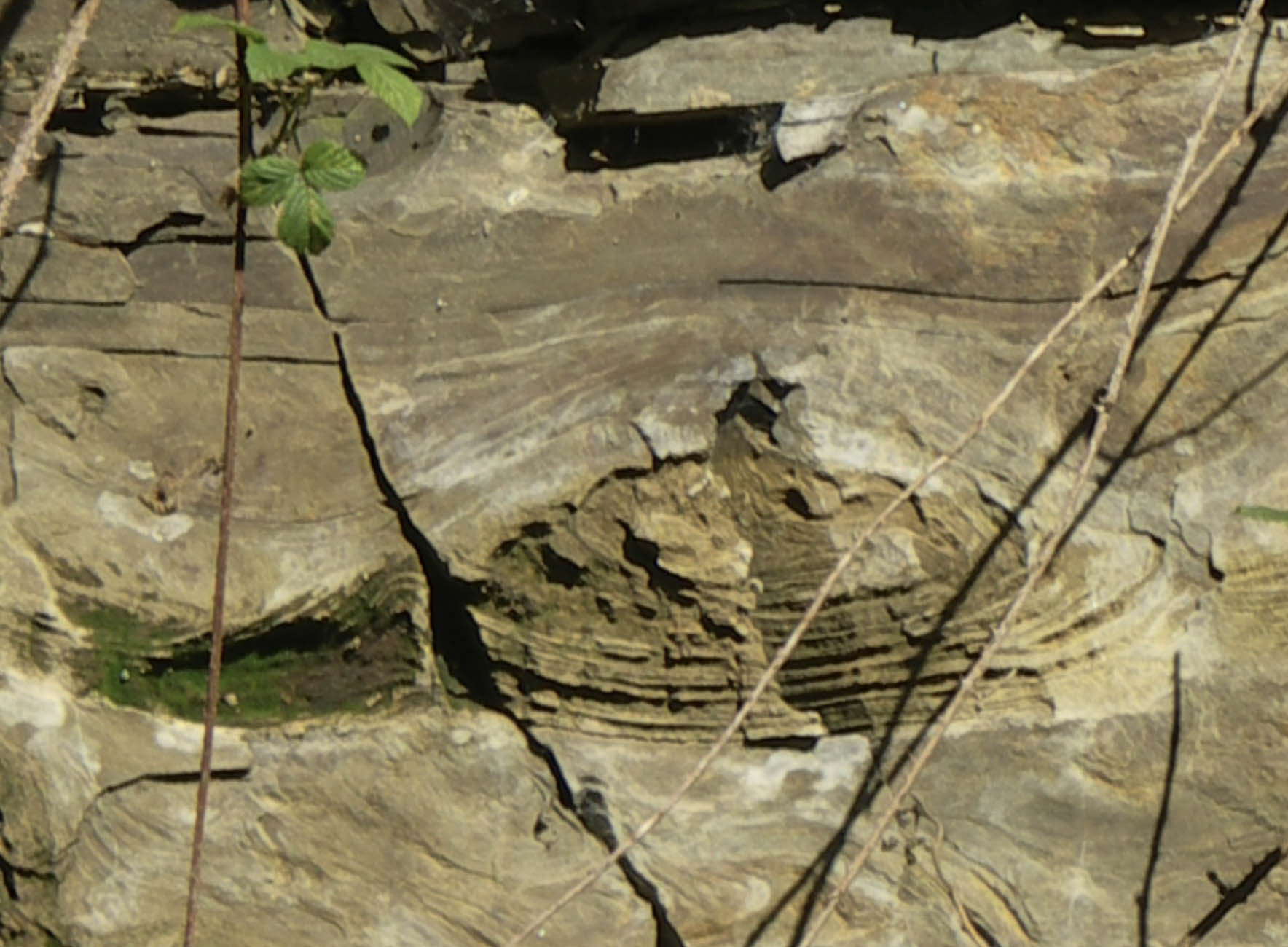 Some sediments  are affected by disturbances,  quite often in quite constrained zones. The types of disturbance vary according to their postulated  cause.  One of the more common type is  balling as shown above, which has been the  result from down slope movement of sediment as result of earthquake.  It is just as likely that a change in hydrostatic equilibrium is  influenced by sea level change which causes movement and flow, or  sediment  heave in early stages of compaction. 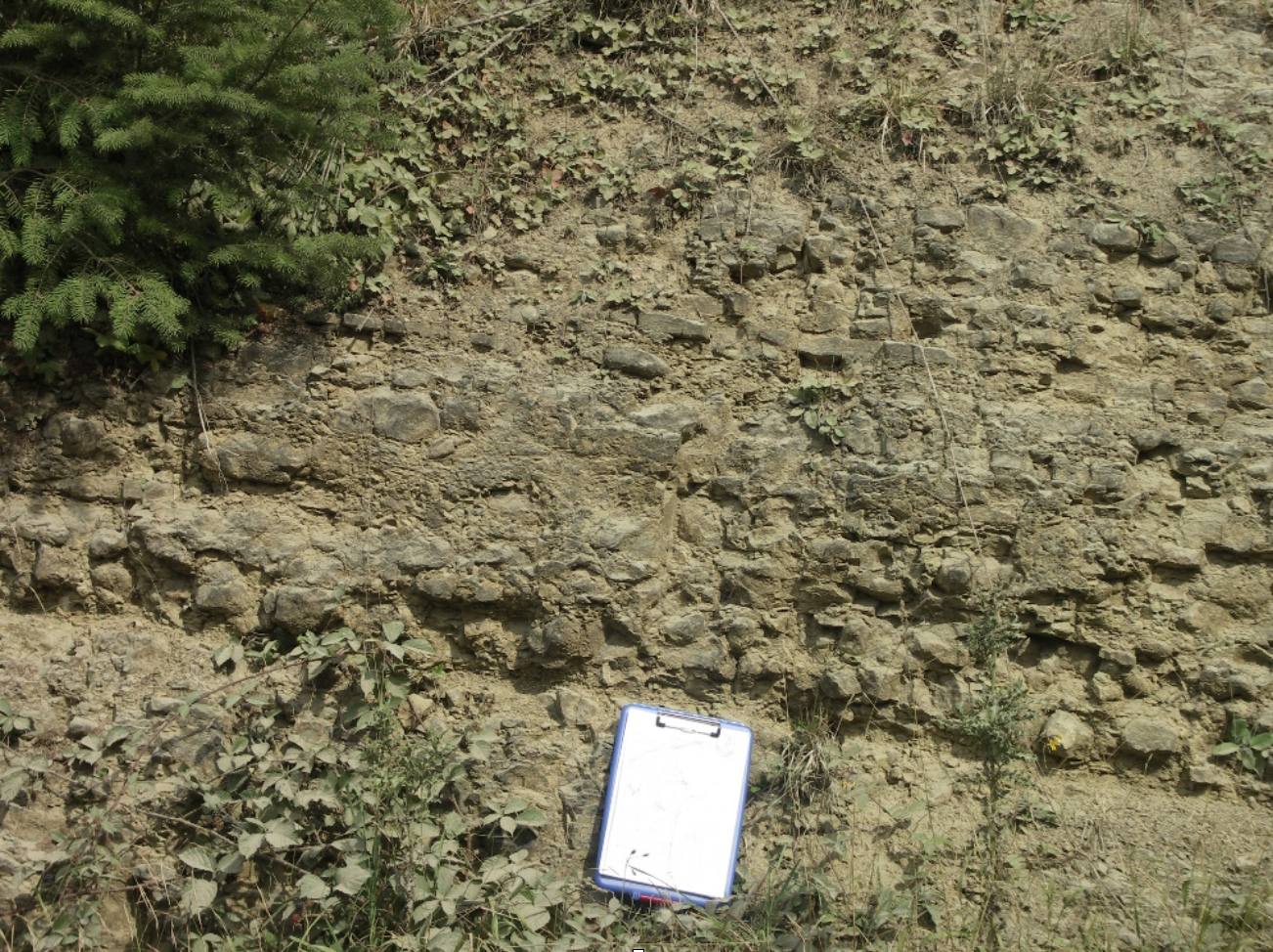 The Knighton Map Rock Store, produced from the collective field work of all surveyors and those engaged in the palaeontological work. 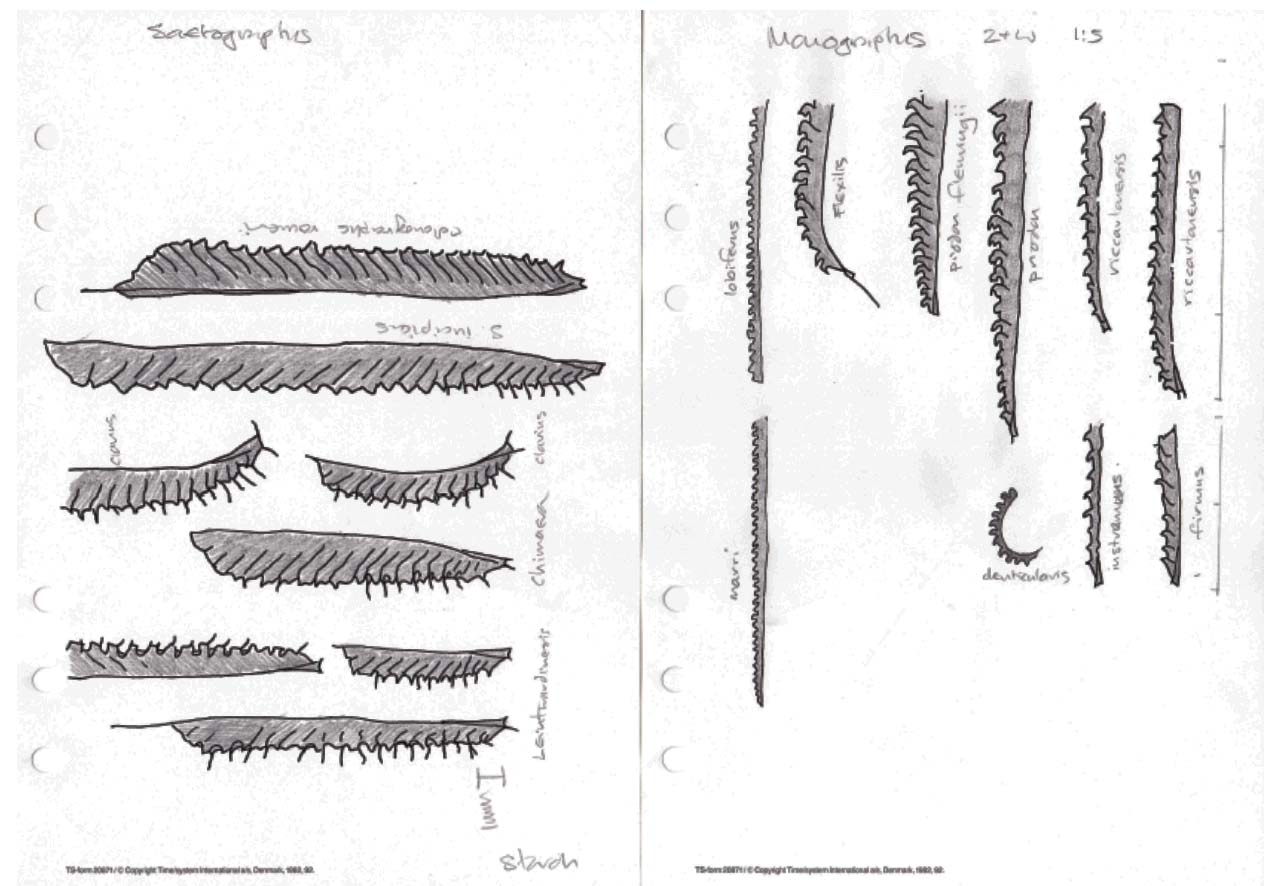 Why graptolites?
They were abundant lifeforms in the Silurian seas. They are excellent index fossils (fossils used to relatively age date rocks) as they had short species durations, which means that a given form of graptolite found in rocks from different places is a good indictor that thoss rocks were deposited around the same time.

The image is from part of the handbook that Arthur developed to help with identification, for in his own words.

Paul Bate  and I  did do some further surveying [independently]   on the area around Crossgates,  and partly as a result of that  I had to undertake something of a diversion from the map to get on top of the graptolites.  For this I became so annoyed with the state of documentation available to the practical geologist  [as opposed to the esoteric palaeontological enthusiasts]  that I just had to work on compiling my own ‘handbook’ , a kind of practical field guide.  I do now have at least means of identifying most of the  Upper Silurian types, and this may be something that  would be worth improving upon in the future, maybe as a group exercise.”

In the end the  graptolite surveys by the Woolhope Group were also  absolutely crucial to the outcome. I had asked Moira to visit a number of sites in 2019 , which were designed to try to find the boundary between the  Wenlock and the Ludlow  Series, as well as delineate the Gorstian from the Ludfordian.  And thus it was done,  and the boundaries have been well demonstrated. 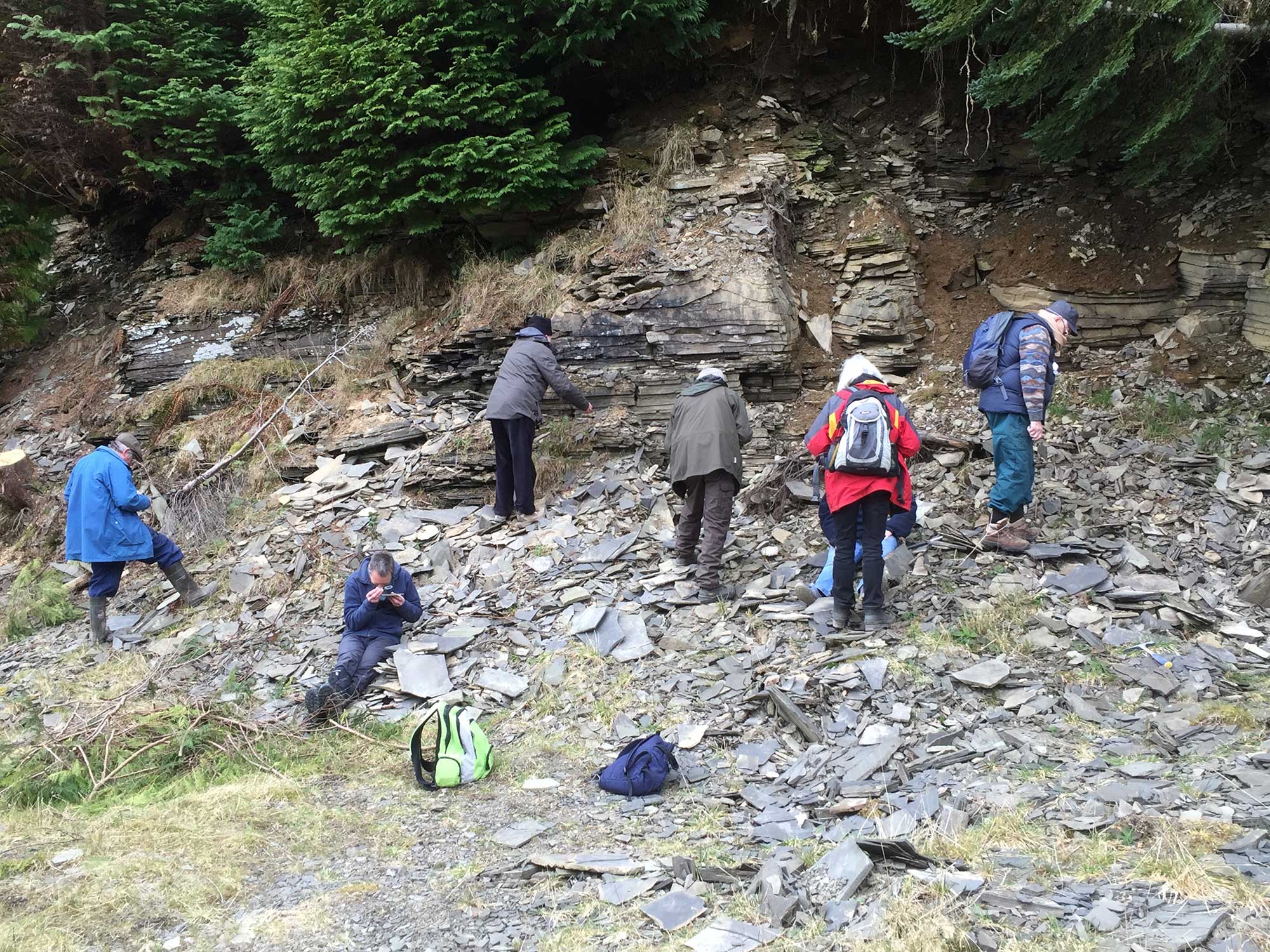 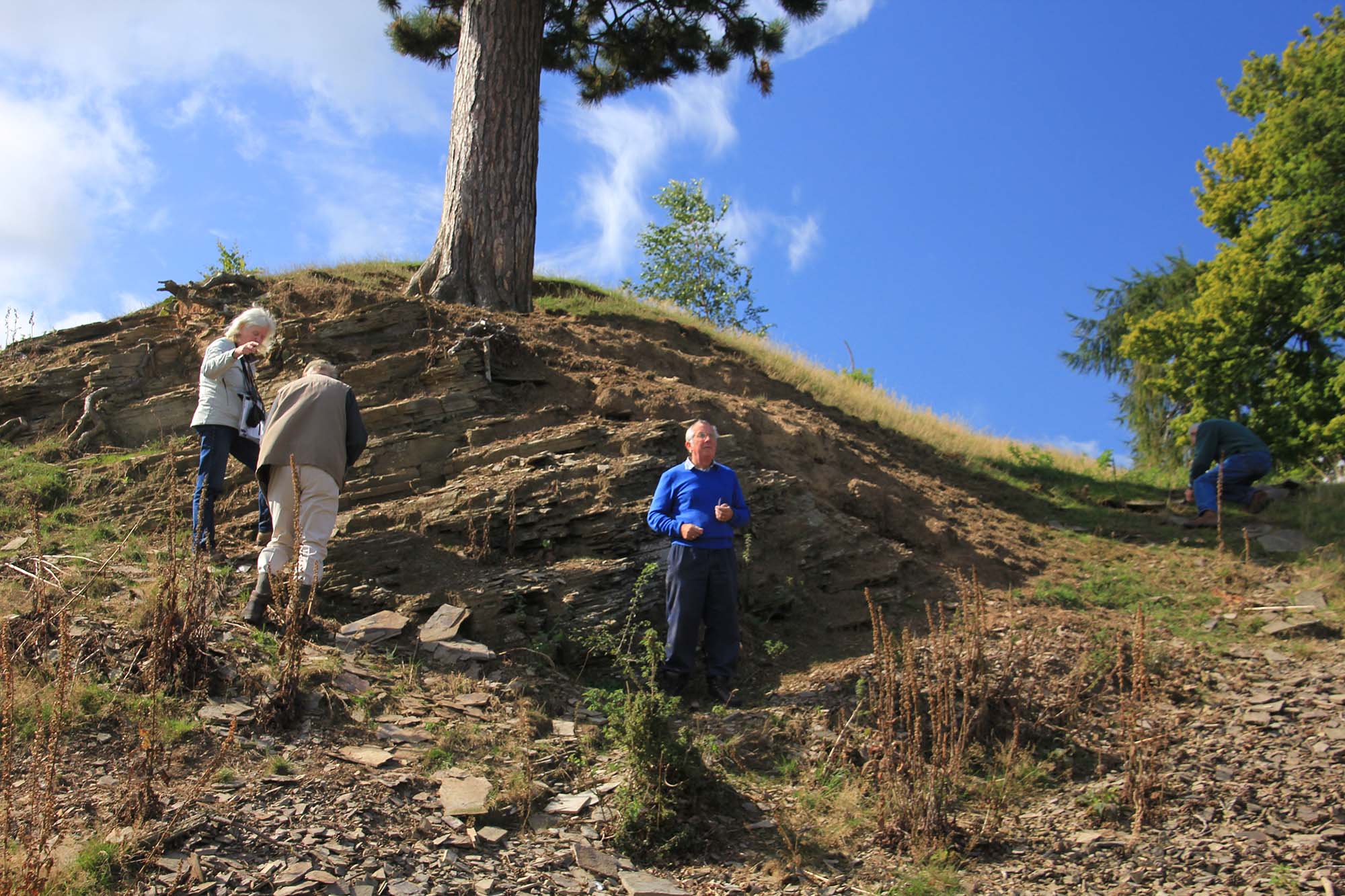 A  probable Torquigraptus sp  found at a tip to the north of Crossgates, near Rock Chapel, which very nicely pins down an age of Telychian, upper Llandovery Series.  The original looks like a B pencil smudge on a  crispbread  biscuit.

These extracts are from Arthur’s update on the project published late 2020. Read the full report. 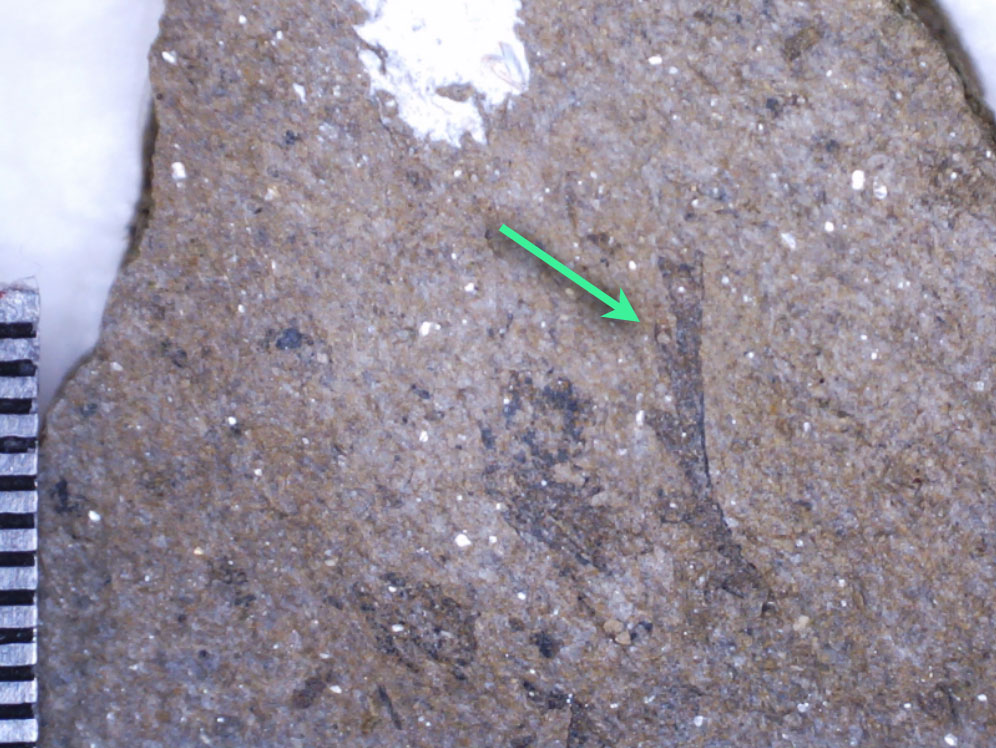 Sources of data used in preparing the map 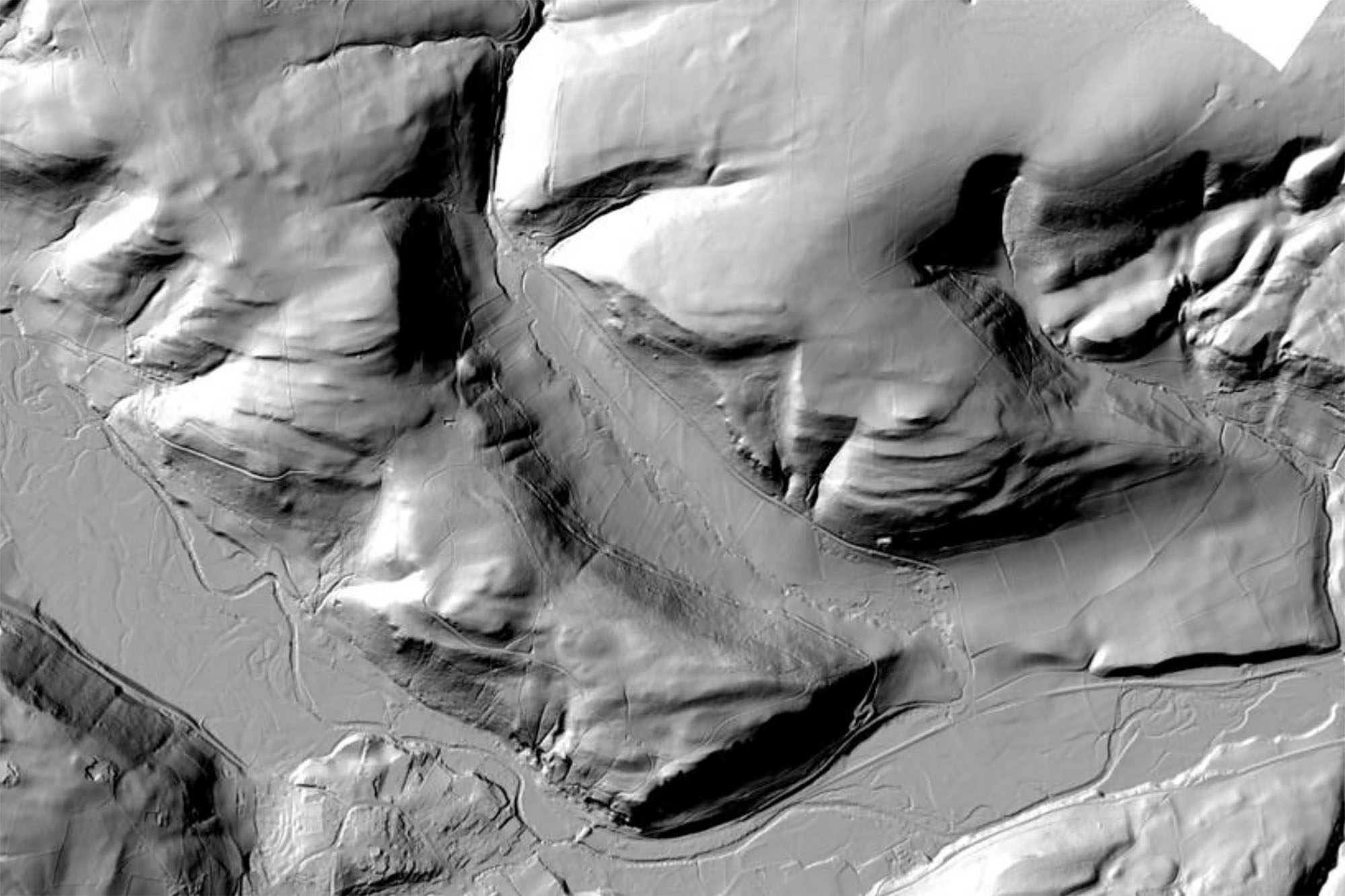 More information here from GA Festival 2018 overview of the project 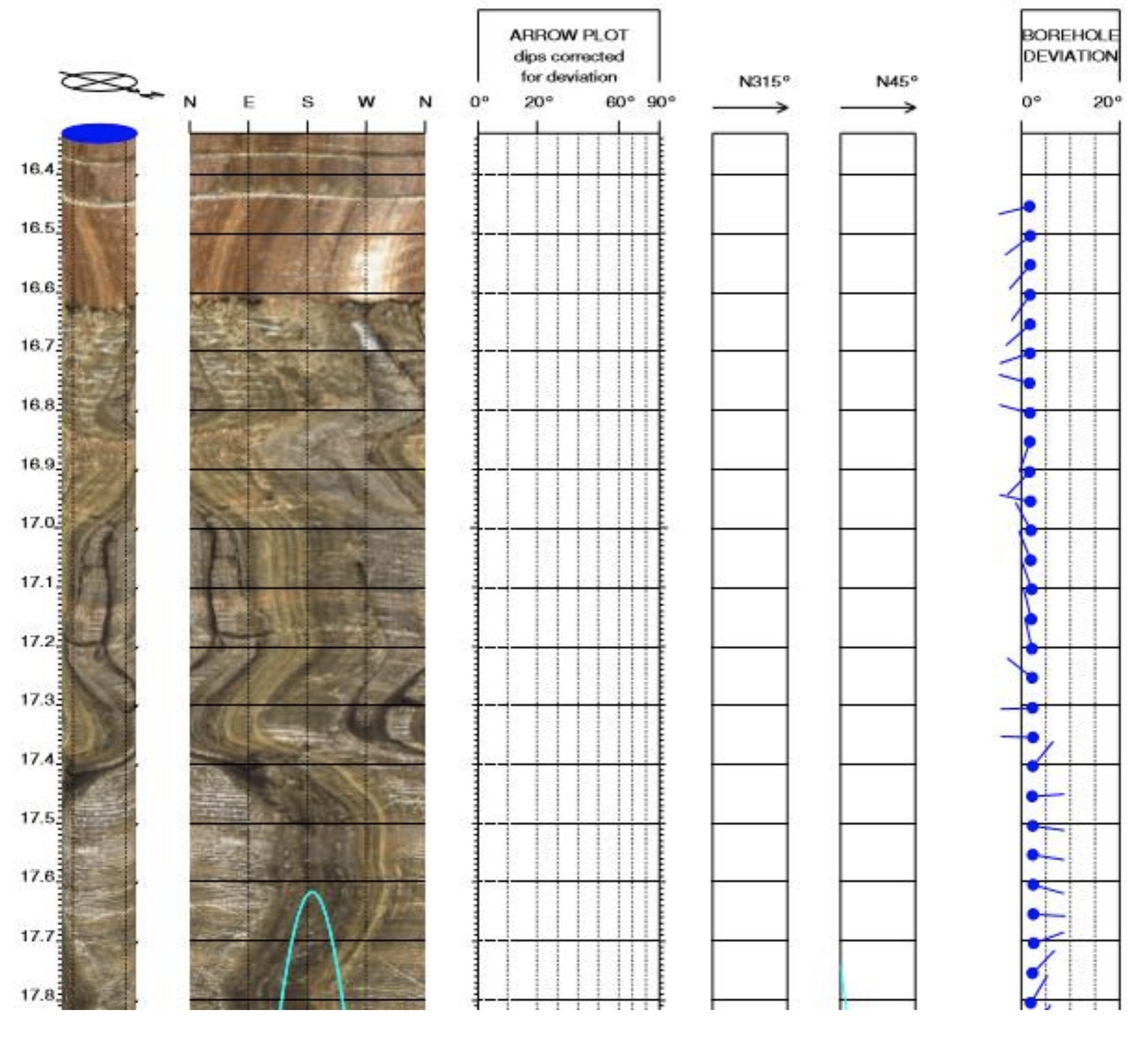 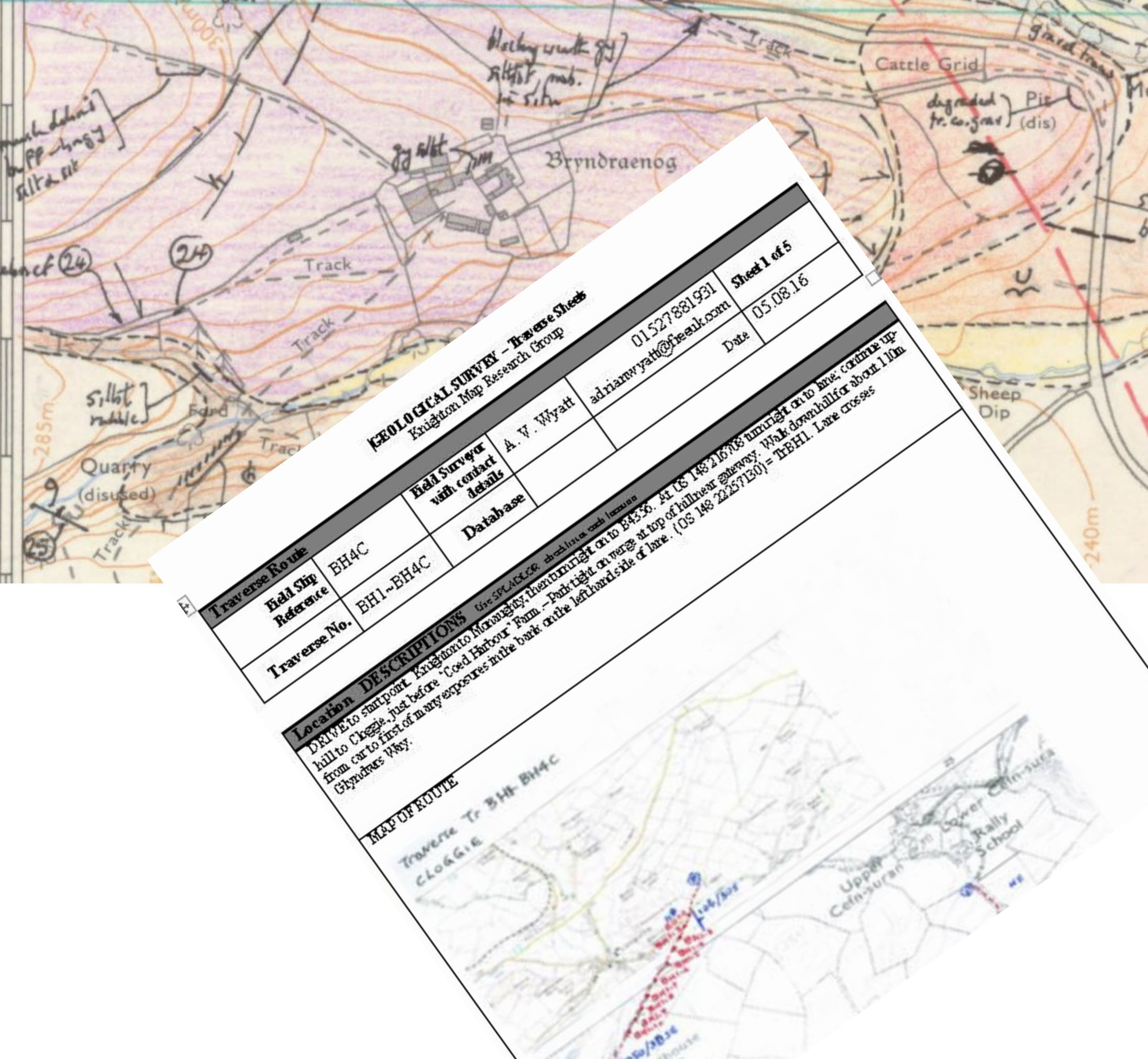 Building up the map 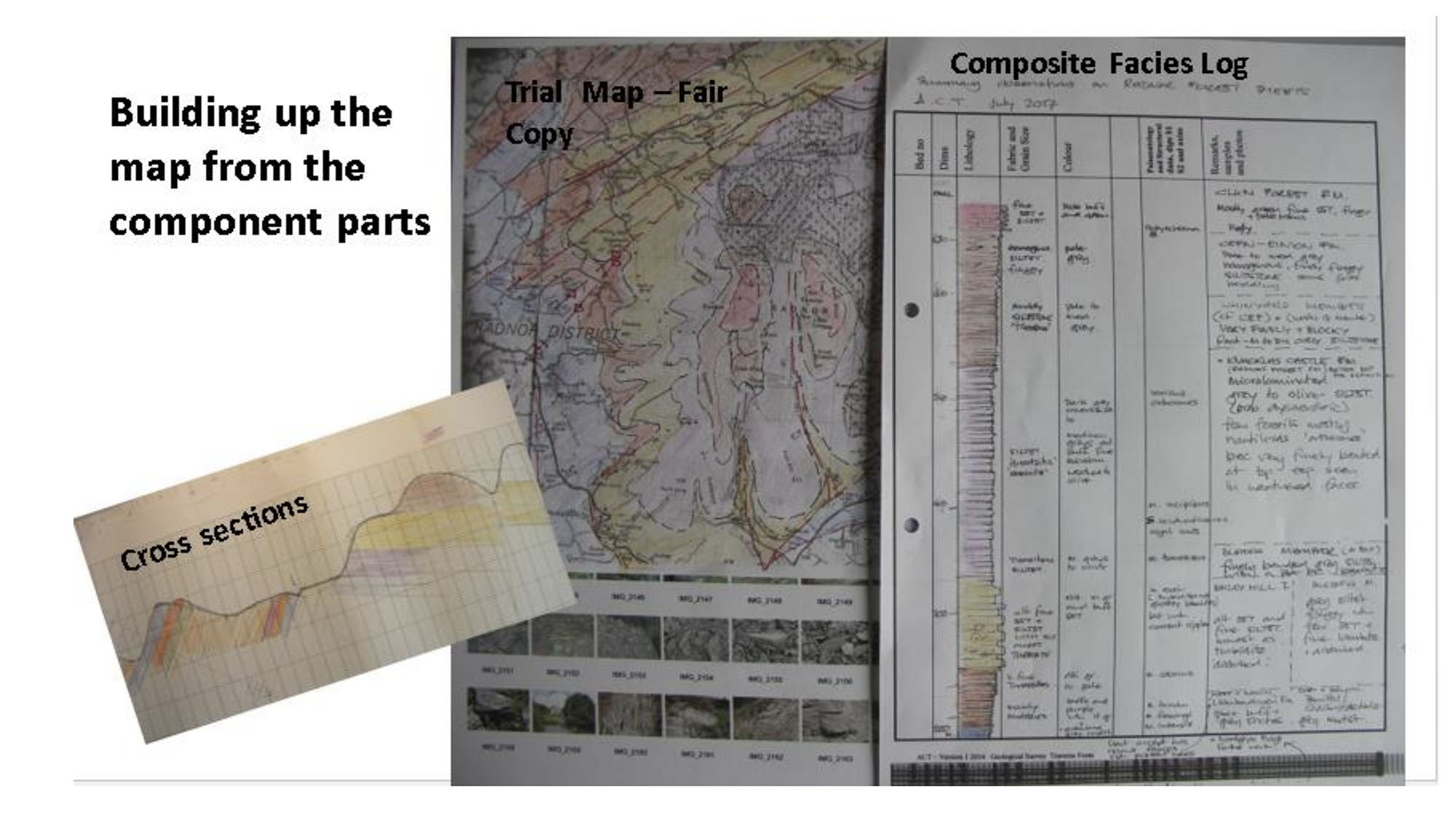 Building up the map from the component parts. 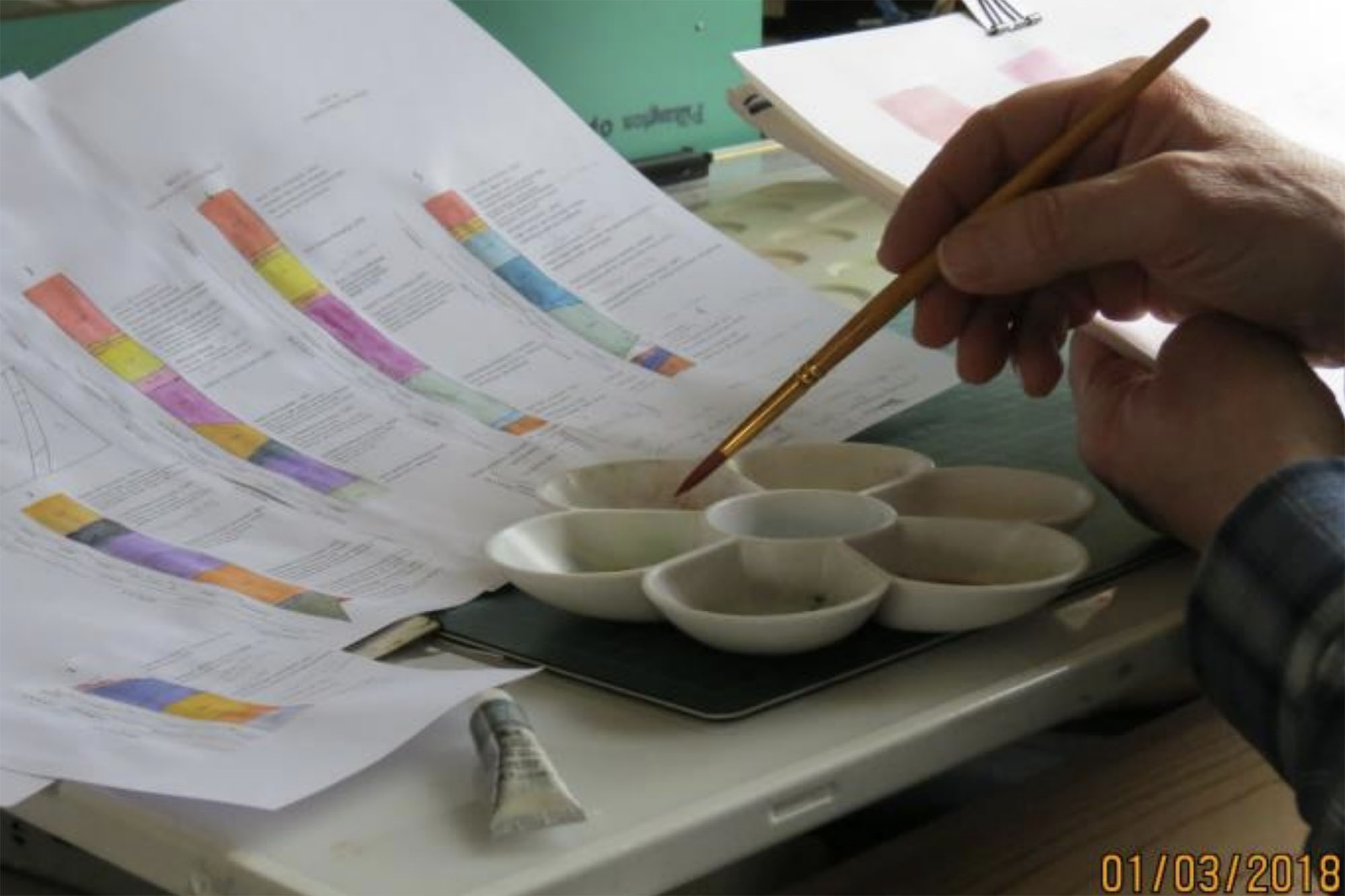 Working up the revised lithological classification and geological columns 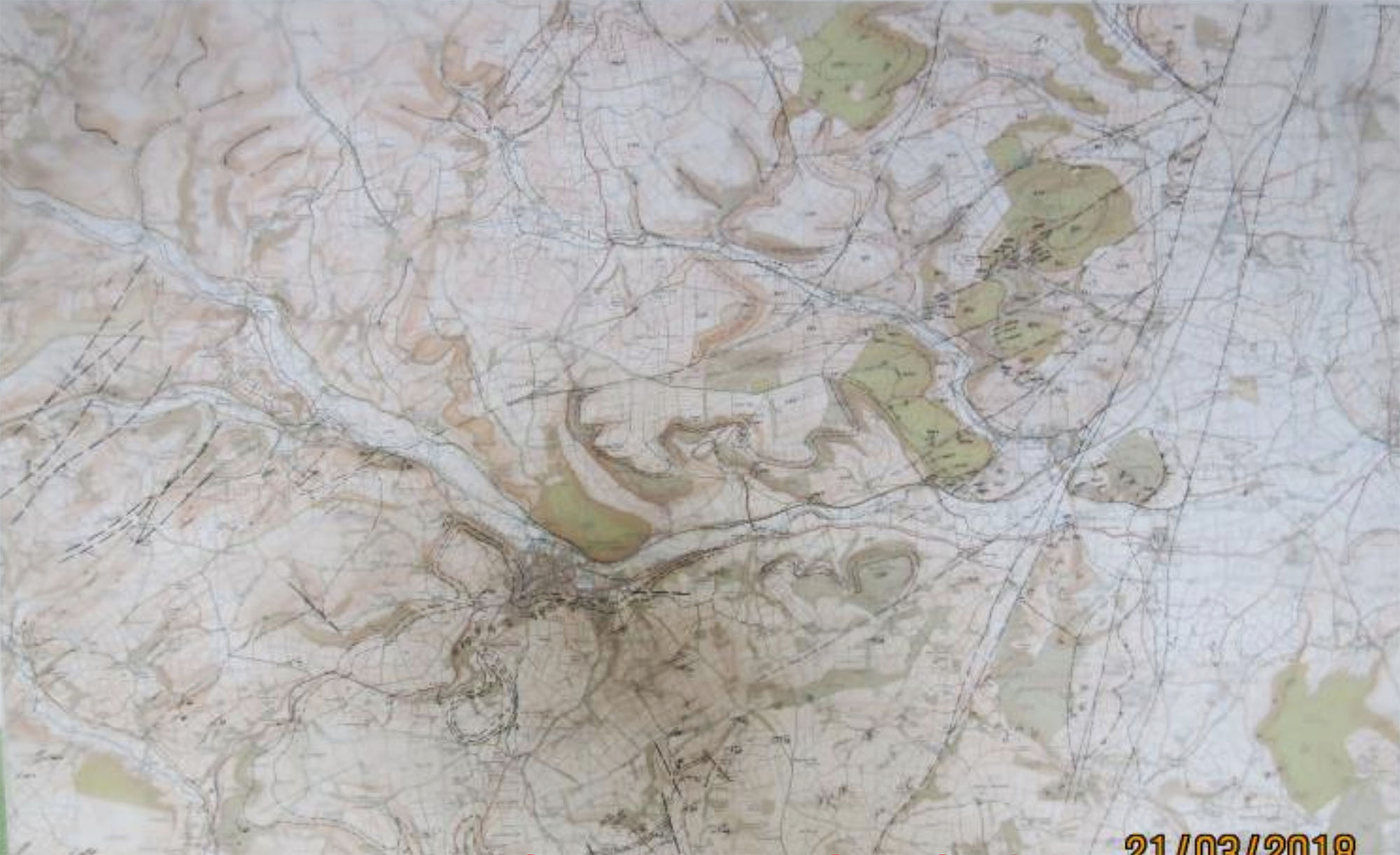