A small igneous dyke intruded into the red mudstones of the Moor Cliffs Formation (Raglan Mudstone) of Silurian age. 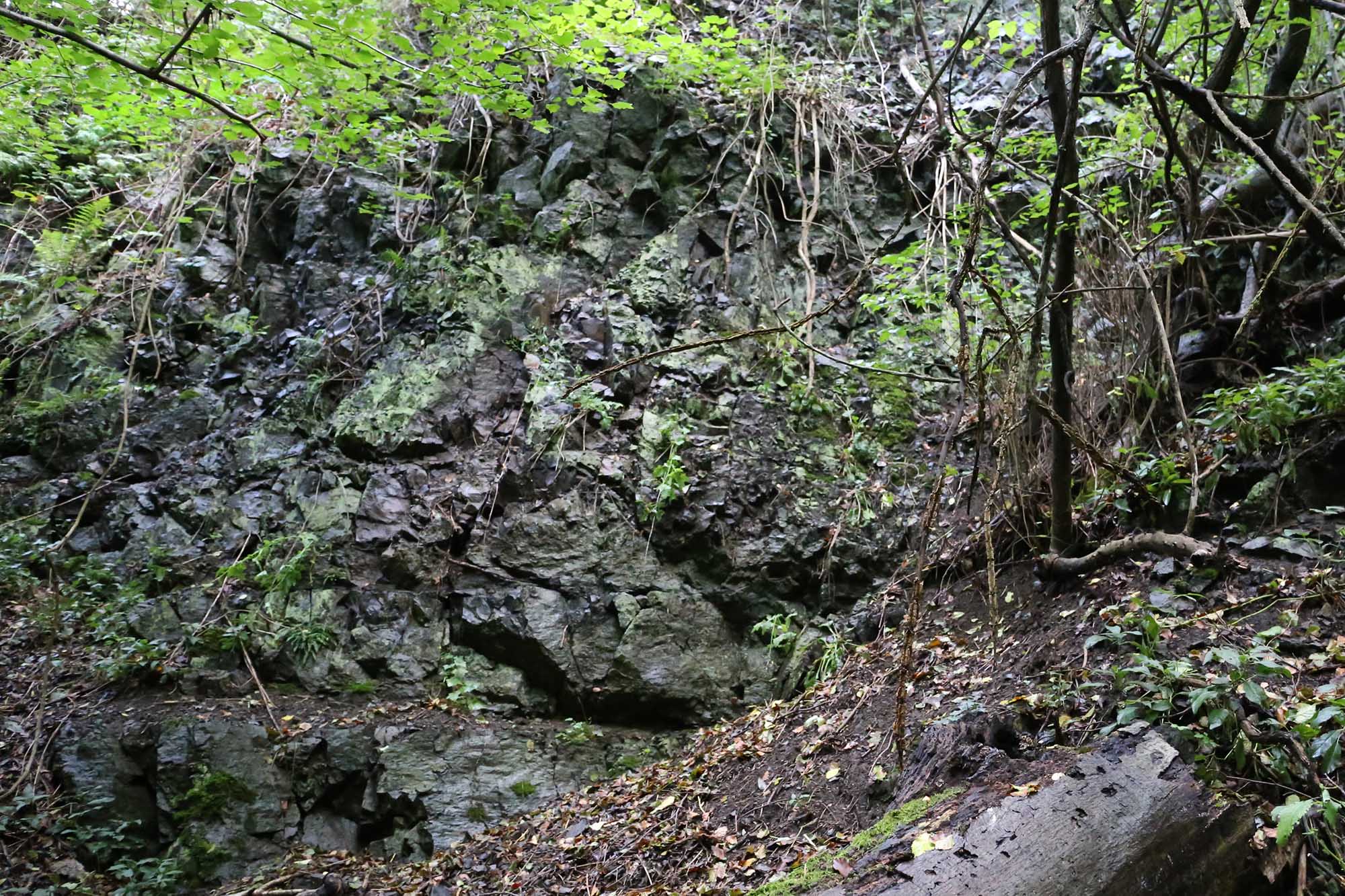 The dyke exposed in an old quarry (on private land) just north of Brockhill Court and Shelsley Beauchamp. 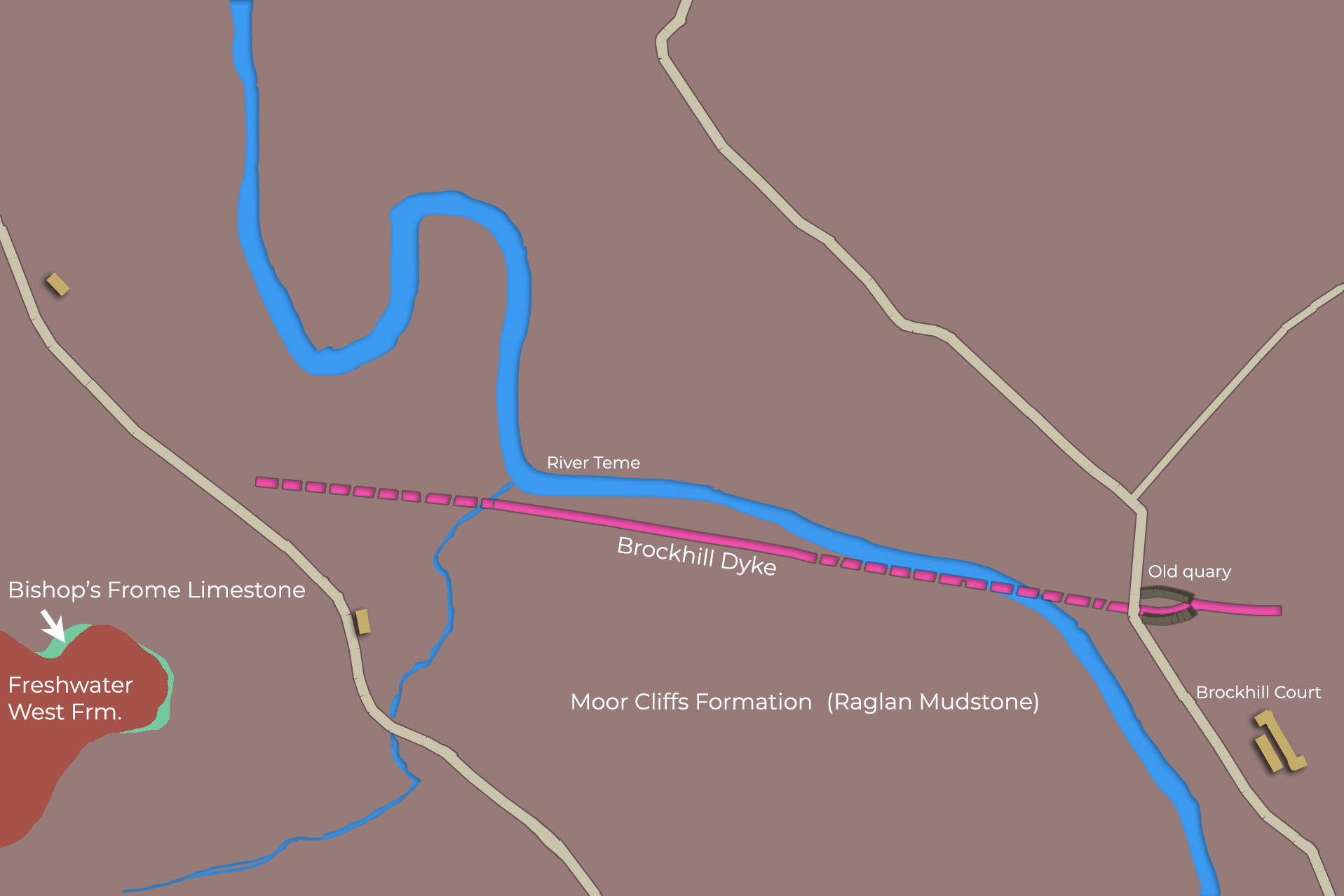 The dyke within the mudstones of the Moor Cliffs Formation.
Dotting indicates inferred location of the dyke.
Click on the map to enlarge it.

By far the best way to examine both specimens of the dyke and the changed (metamorphosed) rock the igneos rock intruded, is the stones in the roadside wall at the entrance to Brockhill Court.

Microgabbro is a medium-grained intrusive igneous rock. It contains crystals, smaller than rice grains, which are interlocking and randomly oriented. It is dark green to dark grey, with occasional rare paler crystals.

How is it formed?
Dolerite is the medium-grained equivalent of gabbro. The crystals are slightly smaller than gabbro, indicating that the magma cooled more quickly. It usually occurs as small intrusions called ‘dykes’ or ‘sills’ which are sheet-like and cut through the surrounding rocks.

Like gabbro, dolerite forms from magma that is rich in iron and magnesium, and poor in silica (quartz). 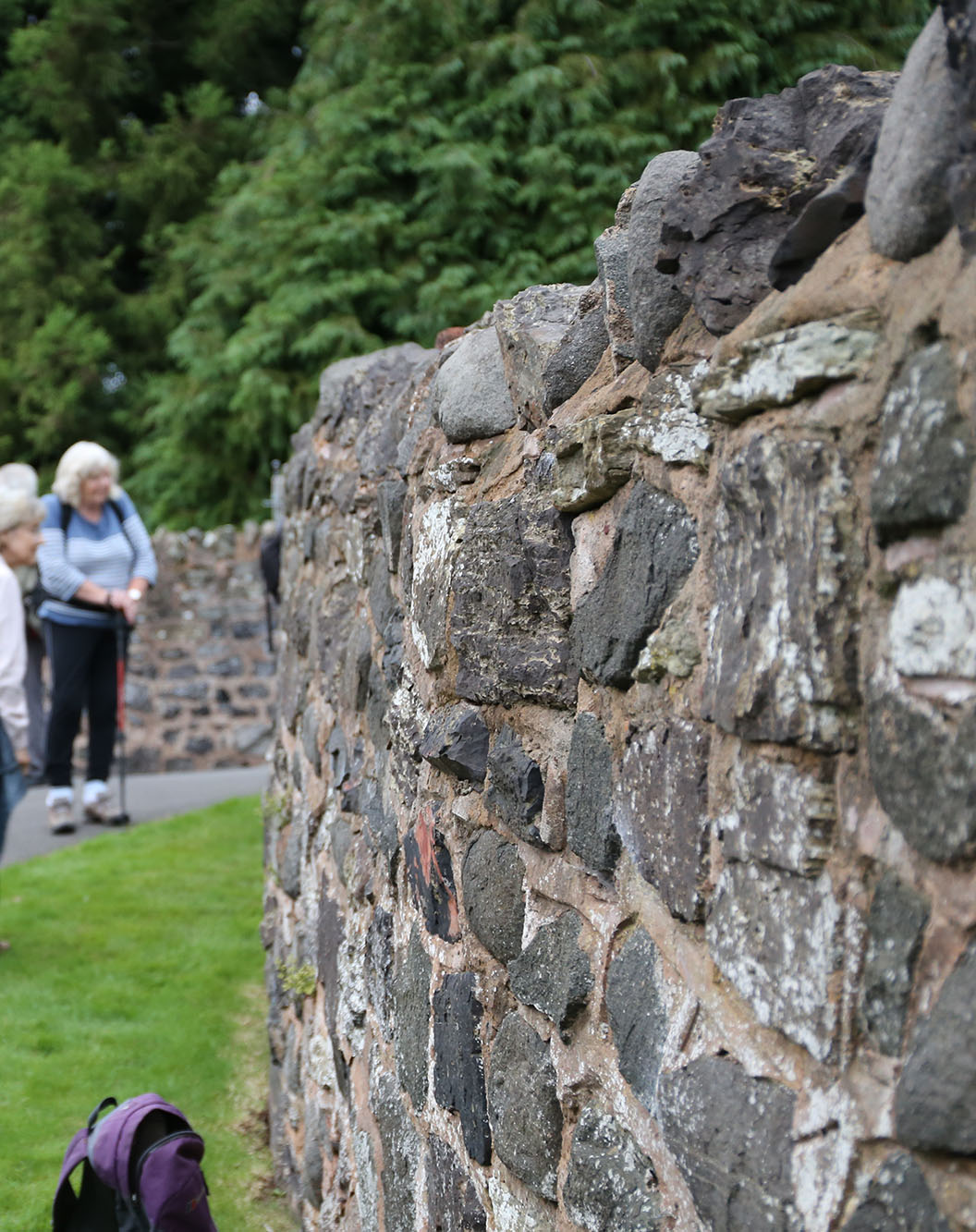 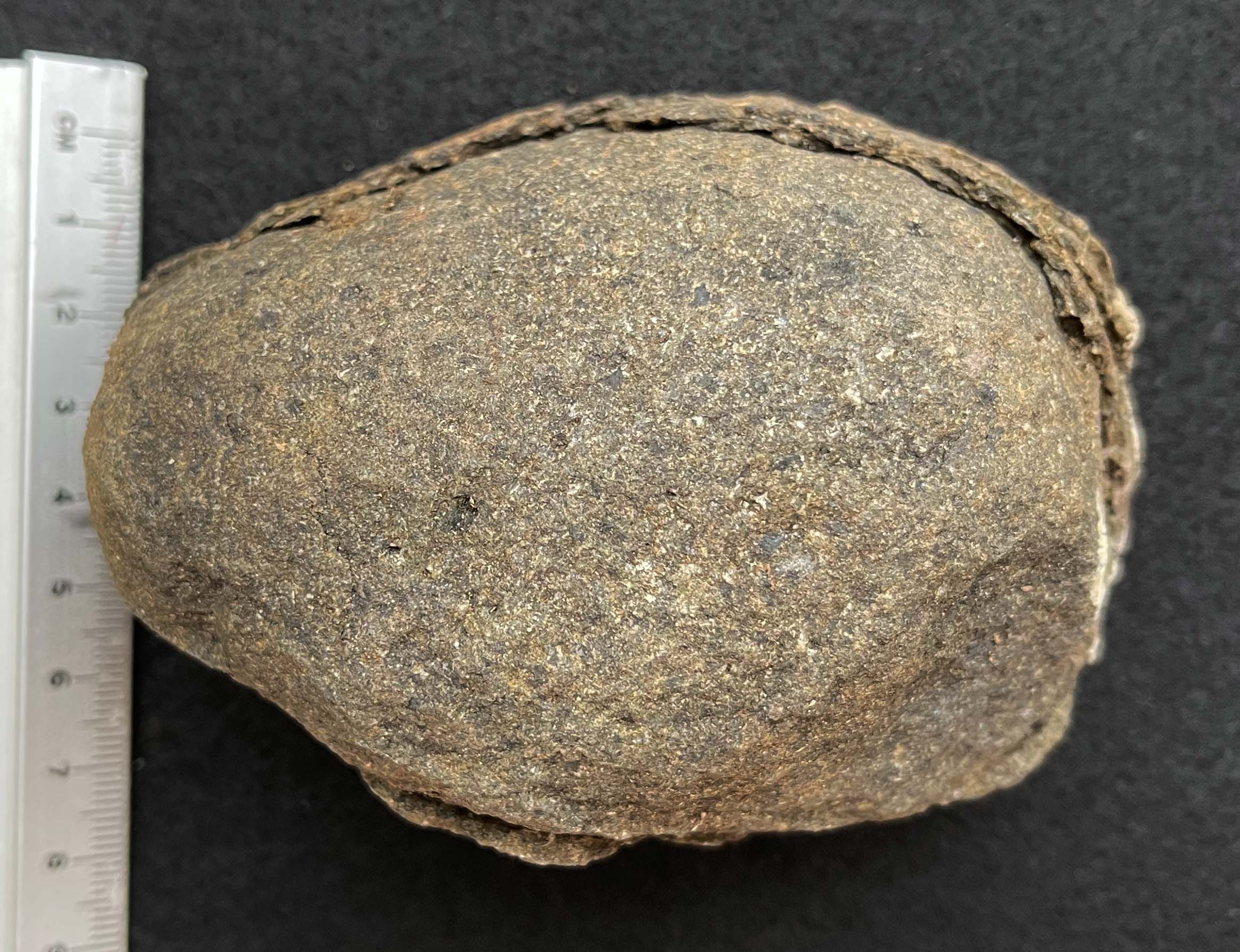 Piece of dolerite (dyke material) displaying onion weathering. The specimen is from the scree in the old quarry in the dyke. This feature is often seen on igneous rocks exposed to weathering for some time. 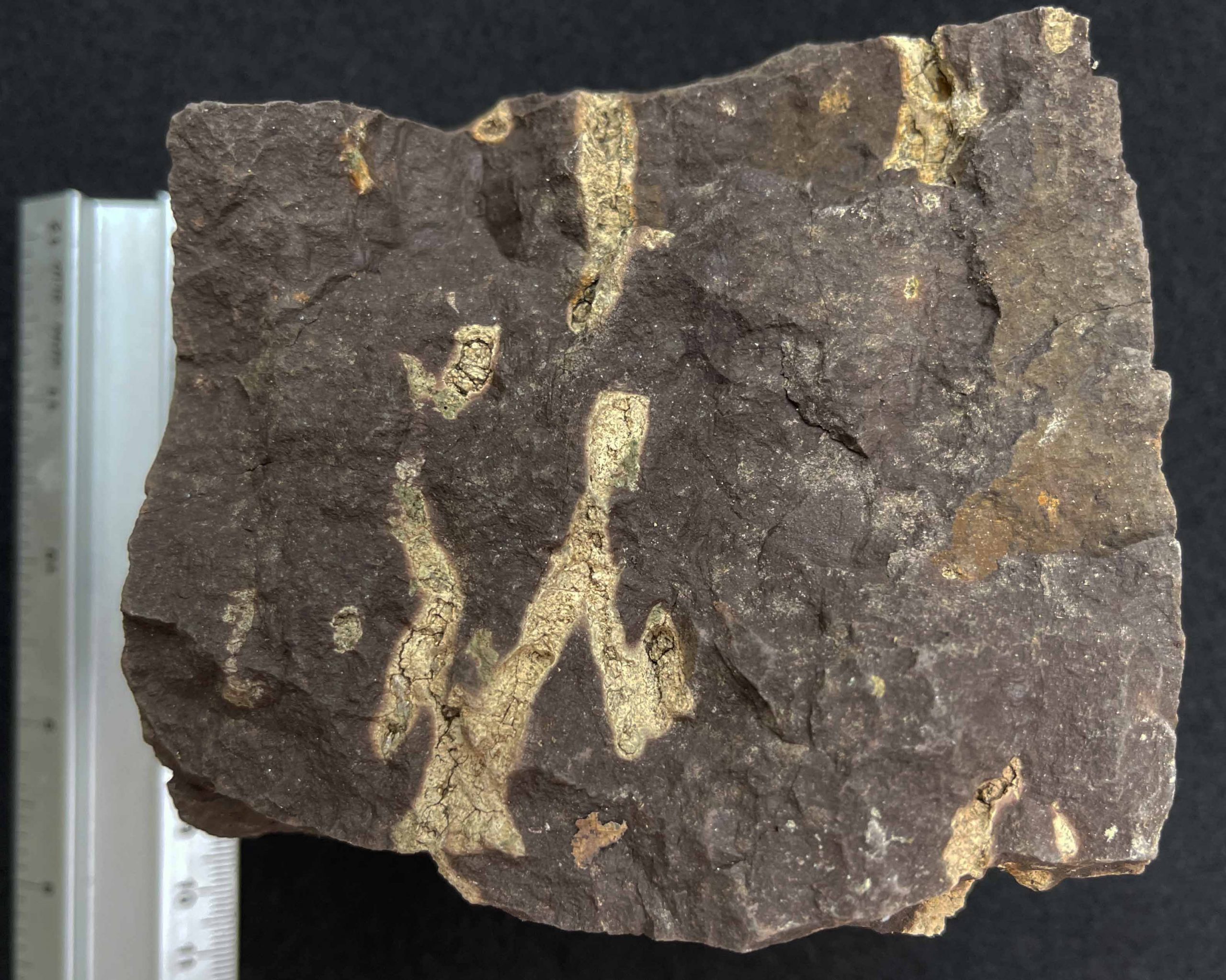 Specimen of the baked (metamorphosed) country rock (the Raglan Mudstone) altered by proximity to the intruding igneous rock with a temperature of around 1600° C. The cream coloured streaks are vesicles produced by gas escaping horizontally from the igneous rock, subsequently filled with calcite and other minerals. 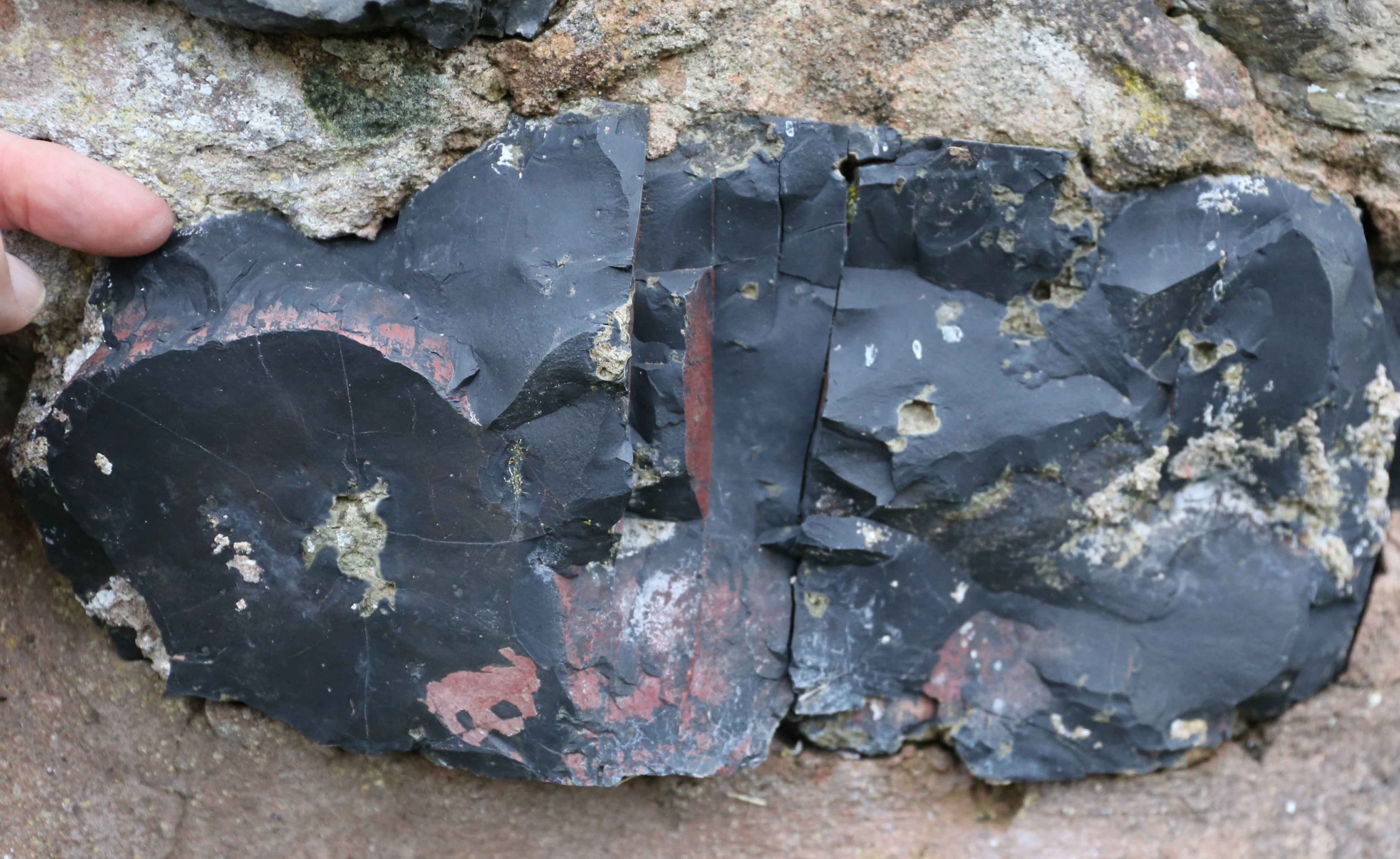 Specimen of hard metamorphosed rock – originally soft mudstone. The specimen also contains a number of vesicles. Examples like this are abundant in walls near Brockhill Court. 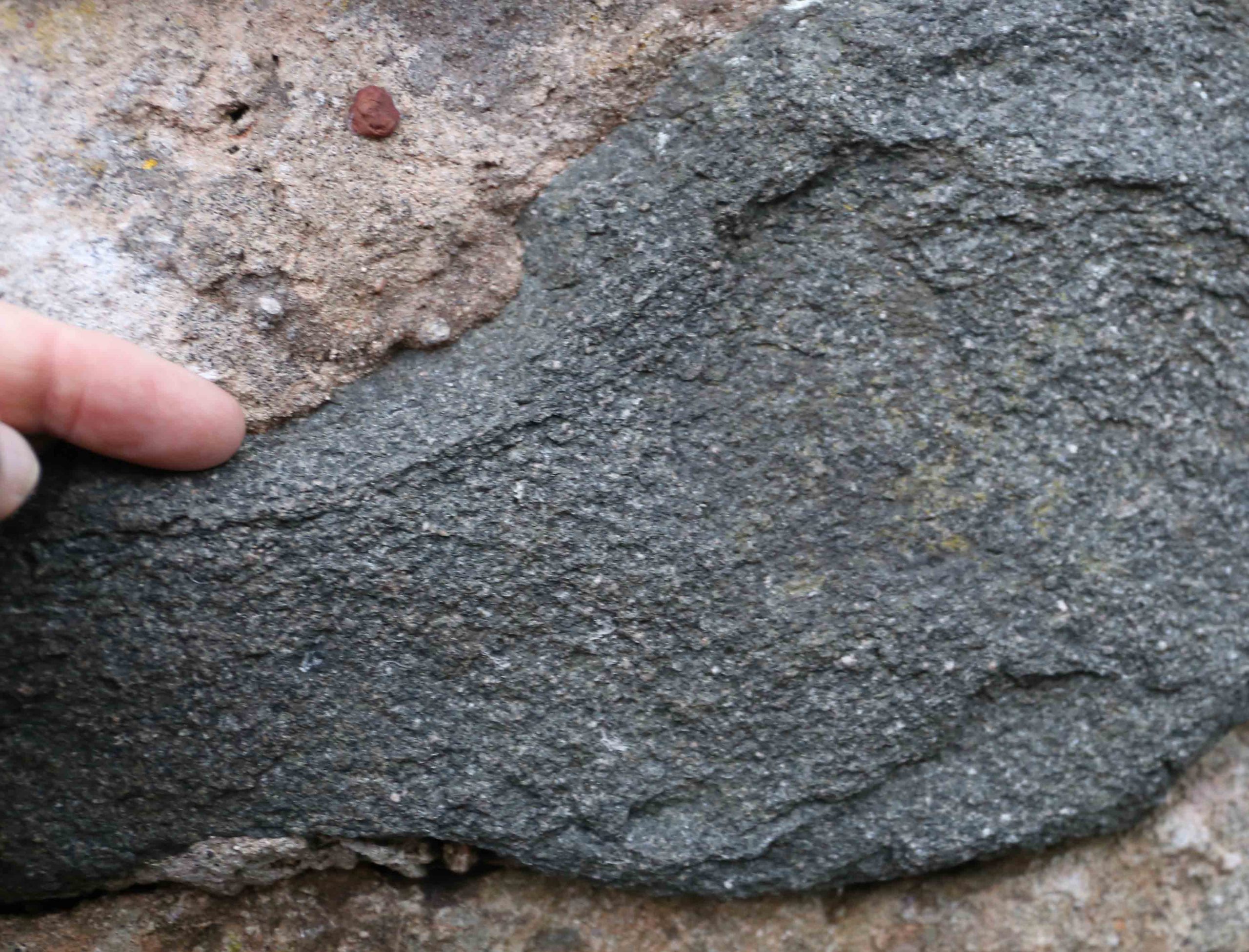 Another rock in the wall of Brockhill Court, this time unweathered dolerite from the dyke. The specimen displays small crystals. The larger the crystals of an igneous rock the slower it cooled.

The dyke has evidence of multiple phases of intrusion as evidenced by differing mineralogy.

Specifically the dolerite iin this dyke is teschenite, which consists primarily of plagioclase feldspar, analcime, and titaniferous augite, with barkevikite, nepheline, and olivine usually in lesser amounts. 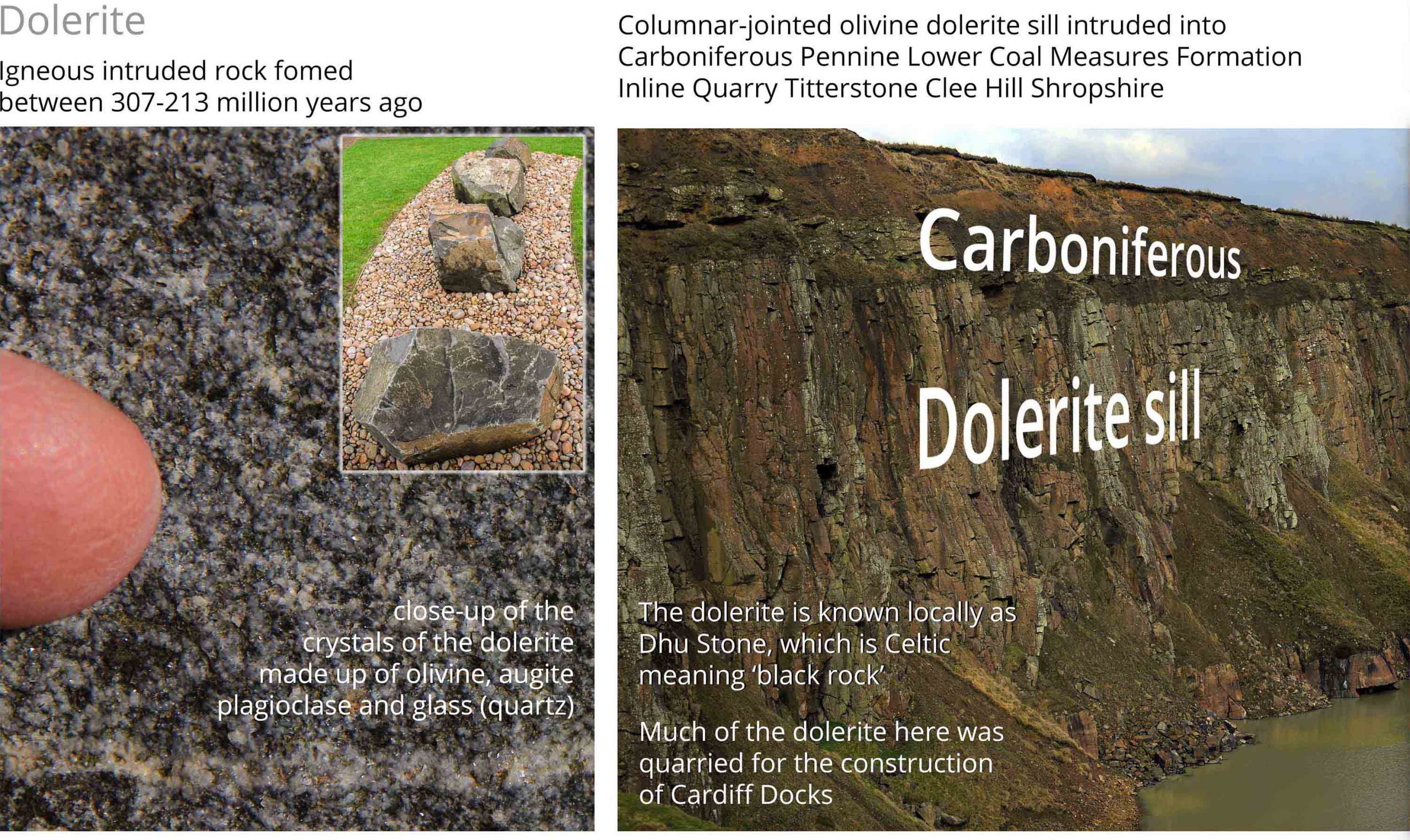 The Brockhill Dyke is part of the igneous activity fond throughout West Midlands duing the later Carboniferous into very earliest Permian times. The diagram here suggest how the sills (horizontal intrusions) found at Brown Clee Hill, Titterstone Clee Hill, Kinlet and Dudley (Rowley Rag) are remnants of a once extensive sill and deeper rooted igneous activity dating between 307 and 213 Ma.  This would be related to the latter stages of the Variscan Orogeny and formation of the supercontinent Pangaea. The boulders of dolerite (insert above left) can be seen in the Geology Garden at the University of Worcester, with explanation in the app GeoGarden. 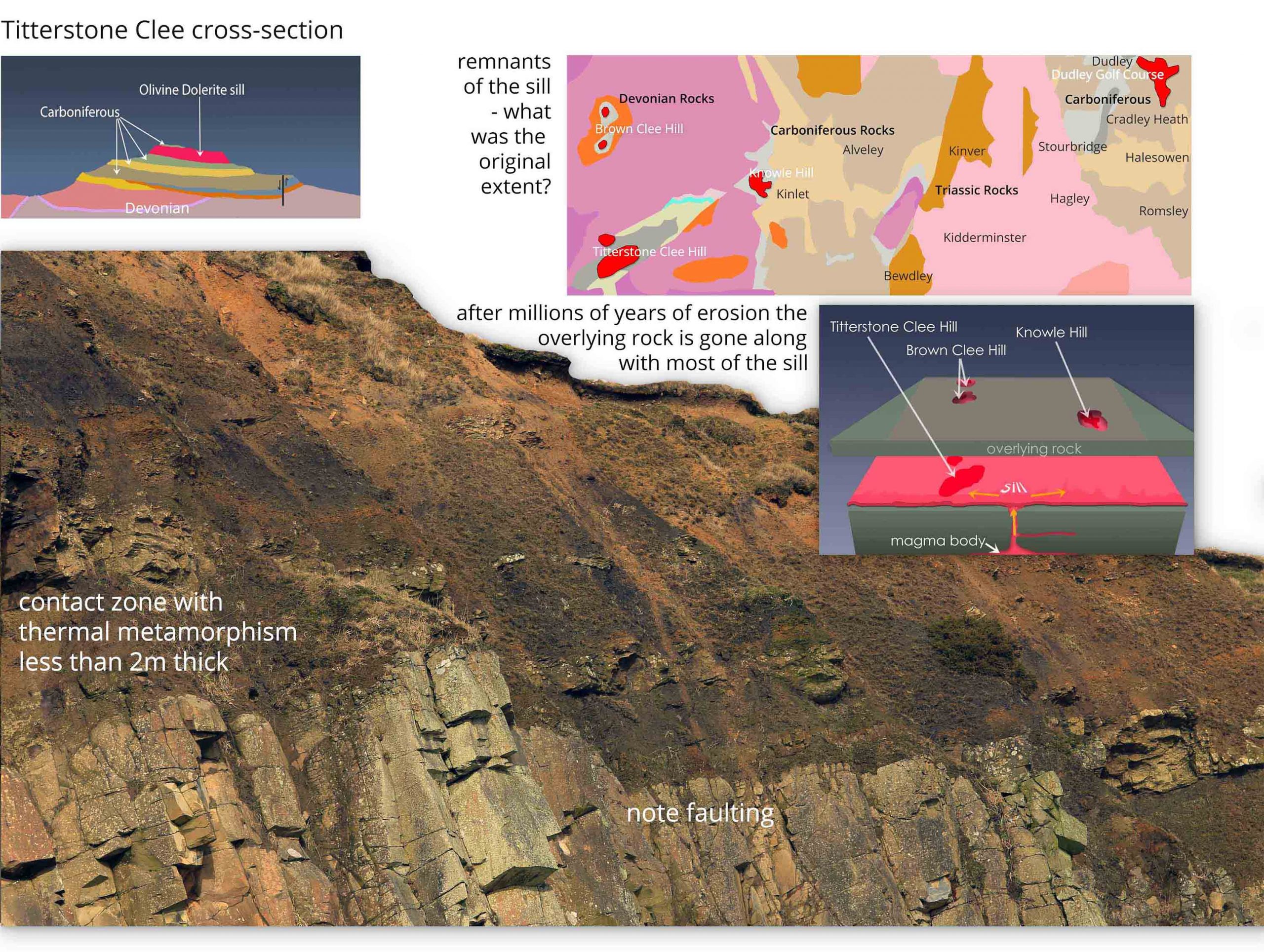 Paper on the Brockhill Dyke
The composite dyke at Brockhill Worcesterhire, Taylor J.H. 1940
Note due to the age of the paper some of the terminlogy will differ from that of the present day.

We drove to Brockhill Court where we made our acquaintance with Sir Anthony Winnington, who was doing a bit of gardening, and who most graciously allowed us to see the fascinating geology that exists on his land, adjacent to the house. A dyke is exposed in an old pit. Little remains of the dyke except high up in the eastern end of the pit. However, good fresh specimens of the rock were obtained after a stiff scramble halfway up the face. Sodium rich, it belongs to the syeno-gabbro suite of rocks. It’s mineral composition is very similar to gabbro but the inclusion of an alkaline mineral, (either nepheline or analcite – in this case analcite) distinguishes it from gabbro. Plagioclase feldspar, clinopyroxene, analacite (easily distinguishable), minor amphibolites and biotite make up this medium- grained basic rock. The dyke extends east-west for about 1200 metres and is exposed in small pits on the western side of the Teme. The river itself runs along the line of the dyke until it finds a way through, just below Brockhill Court. Emplaced in the Downton Series of red marls and sandstones it is about ten metres wide and dips almost vertically. No in situ examination of the margins was possible but the Droitwich Memoire has it that narrow doleritic edges to the dyke can be seen. Loose specimens were found of what may have been a fine grained rock from the chilled margin of the dyke. Excellent examples of spheroidal (onion) weathering can be found in the debris of the pit and on the exposed face. The country rock, marls, silts and sandstones, were ‚baked‚ by the hot (1600 degrees C?) magma. The sandstones and are now hornfels, a very hard, metamorphic rock. During the baking some layers of the purple marls were sufficiently plastic to allow the escape of volatile gases and the development of vesicles and tubes which were later lined with calcite, chlorite and analcite. Extreme baking produced vitrified black specimens with conchoidal fracturing. Good examples of all of these rocks can be found in the garden walls of the nearby Brockhill Court. An explanation of the cause of the Brockhill dyke was given by our very knowledgeable guide, Prof Donny Hutton. The dyke is one of a suite of dykes emplaced in late Carboniferous times (300 Ma) during the Variscan Orogeny. Similar dykes with similar E-W orientation can be found inNorthern Englandand the Midland Valley of Scotland. Variscan subduction with consequent loading and downbending of the lithosphere induced flexural bulging‚ with uplift and tensional fracturing of the crust. Low degrees of adiabatic melting [melting produced by pressure change with at a constant temperature] produced buoyant syeno-gabbros which rose and pushed into the fractures. 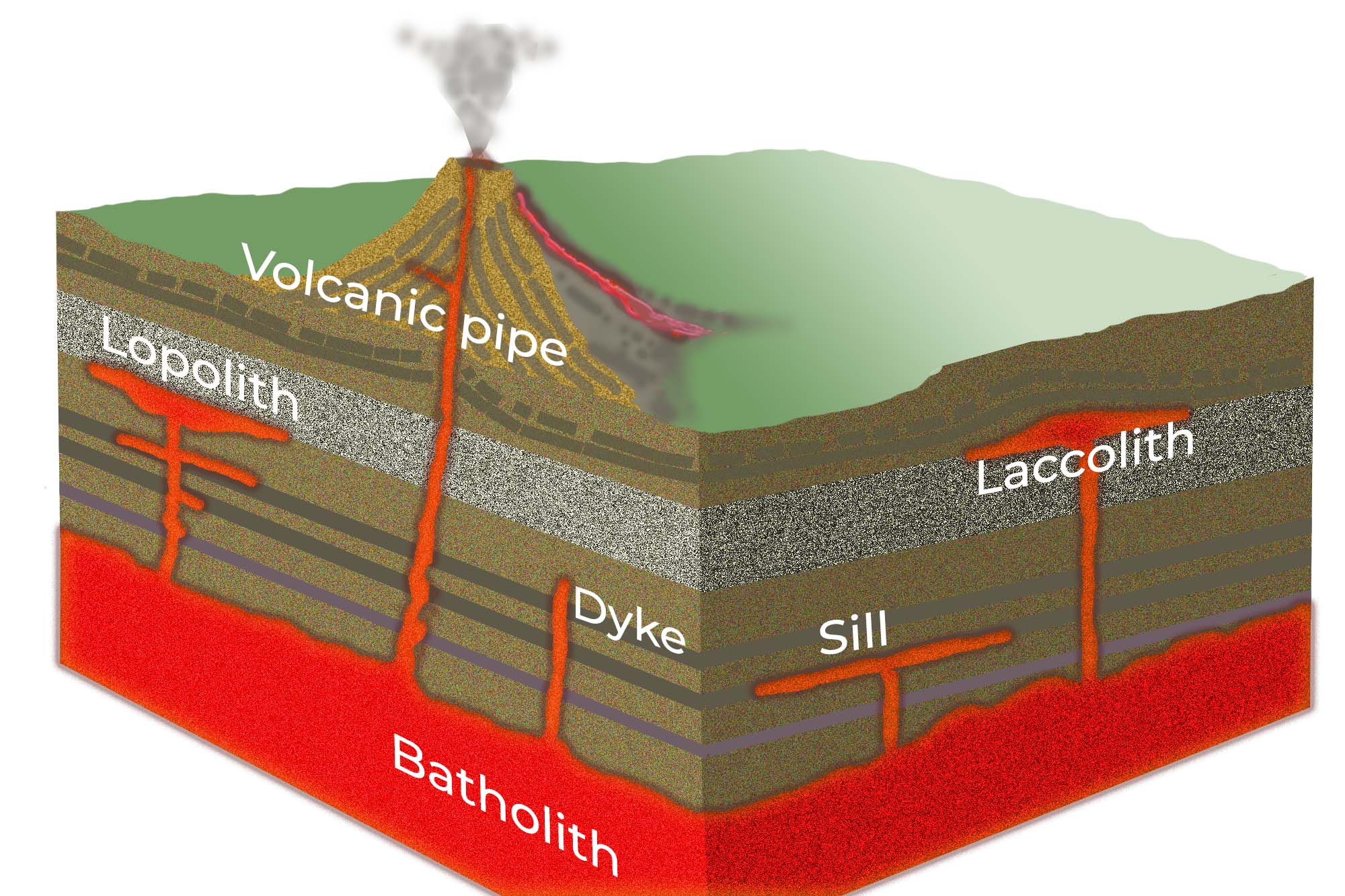